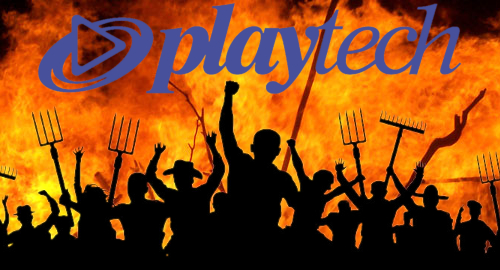 In a trading update issued Wednesday, the UK-listed Playtech reported adjusted earnings of €117m in the first three months of 2020, with an additional €23m in the month of April. The company said the Q1 result was “in large part driven by the exceptional performance” of its Tradetech financial services unit.

In March, Playtech said Tradetech was enjoying ‘significant’ gains from increased market volatility and trading volumes. As of March 19, Tradetech’s earnings stood around €30m, already ahead of the company’s forecasts for the entire year, and this sum grew to over €45m by the end of April.

Tradetech has undergone a major turnaround since 2019, during which its revenue fell 27% year-on-year, resulting in Playtech booking a €90m impairment loss. The situation was sufficiently dire that Playtech was publicly mulling selling the flailing unit, which would have had investors screaming bloody murder had the company made good on these threats.

Playtech’s Live Casino offering also thrived as its primary studio in Latvia remained open while the studios of major rivals in Manila were forced to close as the city went on COVID-19 lockdown. Playtech subsequently struck a deal to provide its Riga product to “the leading Asian provider of Live Casino,” offering Playtech temporary access to this provider’s “extensive distribution channel.”

This temporary deal resulted in Playtech’s perpetually struggling revenue from Asian markets such as China and Malaysia rising to €8m in April, although this is expected to fall to €6m in May as the Asian provider has since resumed its Manila operations.

Playtech’s predominantly retail-focused B2B sport division is currently losing around €3m per month thanks to pandemic-related closures of betting shops in the UK and Greece. The latter market has since reopened its betting shops but the ongoing suspension of major sports is keeping this segment firmly in the red.

In Italy, Playtech said its B2C Snaitech brand was performing “better than was anticipated” in the company’s grim March 19 update, and was “only slightly loss making” in April. While retail operations won’t reopen until June 14 at the earliest, Snai’s low fixed costs and online strength were helping to hold the fort.

Playtech CEO Mor Weizer said his company had demonstrated “remarkable operational resilience” in the face of COVID-19, and with over €600m in cash on hand, Weizer expressed hope that the company would “emerge stronger” as pandemic restrictions ease.

Weizer also offered a fond farewell to outgoing chairman Alan Jackson, whose last day on the job was Wednesday. In April, Playtech announced that non-executive director Claire Milne had been appointed interim chair, with the search for a permanent replacement being put on ice until something resembling normalcy returns.

Investors appeared pleased with the update, pushing Playtech’s shares up 6% by the close of Wednesday’s trading.

Investors were far less enthused about Playtech’s annual report on its senior management’s pay packets, with nearly two-thirds (63.7%) of shareholders voting against the remuneration report versus just 36.3% in favor. Nearly one-third (32.6%) of investors also voted against the re-election of Ian Penrose – who prepared the report – to Playtech’s board.

Playtech offered up the usual platitudes about balancing fiscal responsibility with “the need to retain and incentivize its leadership team.” However, the company vowed to “conduct a thorough review” of its remuneration policy to reflect “market and corporate governance best practices” as well as ensuring “more rigorous implementation and transparent disclosure going forward.” Translation: see you next year, suckers!