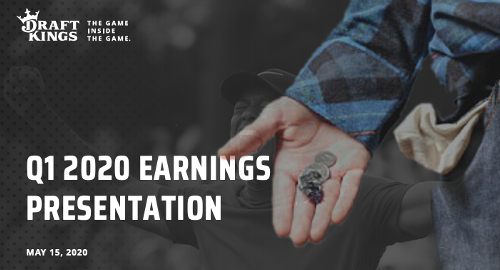 On Friday, DraftKings released its first earnings report following its debut on the Nasdaq exchange last month. The release helpfully offers evaluations on both ‘Old DraftKings’ and SBTech, the European-based betting tech provider that DraftKings absorbed as part of the ‘business combination agreement’ it struck last December.

Old DraftKings generated revenue of $88.5m in the three months ending March 31, up 30% from the same period last year. The company failed to offer insights into how its revenue was split between daily fantasy sports, ‘real’ sports betting and its online casino operations in New Jersey.

Costs were up across the board, particularly sales & marketing costs as the company fought for sports betting customers in states where such activity is legal. Those costs resulted in an earnings loss of nearly $49.5m and a net loss of nearly $68.7m, both of which were more than double the sums DraftKings lost in Q1 2019.

The Malta-based SBTech’s performance was even worse, as its Q1 revenue rose only 3% to €22.6m while costs rose much more. SBTech reported an earnings loss of €851k and a net loss of just under €7k.

DraftKings stressed that both of its units enjoyed even larger revenue gains prior to March 11, when the COVID-19 pandemic reduced the global sporting calendar to Belarusian football, Russian ping-pong and old videos of Michael Jordan pitching pennies.

DraftKings (presumably ‘old’) also claimed healthy growth in both monthly unique payers (MUP) and average revenue per MUP. (For the record, we have no evidence that DraftKings’ internal communications refer to its customers as ‘muppets.’)

DraftKings insists that the current lack of major sports on which to wager is just a phase and that the company didn’t anticipate any impact to its 2021 plans. The Q1 earnings loss was significantly greater than analysts expected, but investors continued to express irrational exuberance, pushing the company’s shares up 15.5% to $29.23 by the close of Friday’s trading.

ONLINE CASINO STRONG, IN-PLAY BETTING MUST WAIT
Asked about his company’s online casino numbers, DraftKings CEO Jason Robins said the vertical enjoyed “strong results” that continued to grow after the sports halt. Asked about cross-selling DFS players to casino and ‘real’ betting, Robins said the results to date have been “in-line with or better than what we expected.”

SBTech’s experience as a European-focused supplier means it’s well-versed with in-play betting, something DraftKings has yet to introduce. Robins said in-play was “a clear and important part” of the company’s product roadmap, but customers likely won’t see in-play “really take shape until probably second half of next year.”

As for the non-traditional sports on which his company is currently leaning, Robins spoke fondly of eSports and ‘simulated sports’ like EA’s Madden NFL video games, which Robins said DraftKings was running “on some days up to 10 to 12 per day.”

Robins said there were currently “a lot of people that are at home looking to watch things” and he envisioned that the Madden product could offer “some potential to extend the NFL season really throughout the year” and avoid the seasonal deactivation of football-focused customers that occurs following the Super Bowl.

Regarding the company’s core DFS customer base, Robins said that the New Jersey market did see “some cannibalization” when the site introduced its new gaming verticals. But DFS remains DraftKings’ top customer acquisition channel, so Robins says keeping DFS customers engaged “is always a focus.”