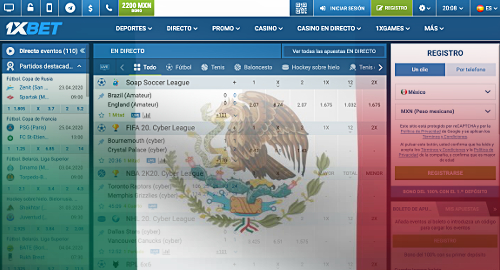 Online gambling operator 1xBet has big plans for its Mexican-facing operations after being granted a license by the local regulator.

Cyprus-based, Curacao-licensed 1xBet was recently awarded a Mexican online gambling license by the Dirección General de Juegos y Sorteos (DGJS), a division of the Ministry of the Interior (SEGOB), which oversees gambling activity in the country.

The 1xBet.com.mx site lists its local subsidiary as Entretenimientos Naturales (Natural Entertainment) and its local partner as Espectáculos Deportivos de Occidente (Sports Shows of the West).

The Mexican company was issued a 25-year retail betting license in 1994, the duration of which was extended in 2018 to 2034. That same year, the Guadalajara-based company was authorized to open 30 additional betting locations.

Interestingly, in 2018 Espectáculos Deportivos de Occidente was authorized to offer online bets via a variety of curious domains, including Pokerstarsone.com, Bwinsports.com, Eddosa.com, Theplayersclub.mx and Theplayersclub.org (none of which are currently active).

1xBet said its Mexican business would primarily focus on football and boxing, two sports with particular appeal for Mexican bettors. However, the COVID-19 pandemic has led to the cancellation of most sporting events, so 1xBet’s Mexican site currently features a whole lot of eSports and not much else.

The last major international online operator to launch a Mexican-licensed site was Bet365, which in June 2019 announced a partnership with Mexico City-based Ganador Azteca. Other familiar names such as Playtech, Kambi and Evolution Gaming have established tech supplier deals with local operators.

There’s probably no better time for a new online operator to launch in Mexico, which has increasingly placed its land-based gaming operations on lockdown. Playtech’s local partner Grupo Caliente was forced to close 41 gaming halls across Mexico last week on the orders of state authorities.

Similarly, Mexico’s National Lottery suspended all scheduled draws from March 29 until April 19 to ensure individuals don’t congregate in small lottery shops. Tickets for cancelled draws will be honored for future draws, although those will only resume if the authorities deem it appropriate.