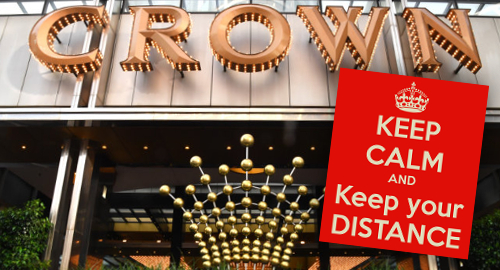 Casinos in Australia and New Zealand are resisting calls to shut down their operations to deal with the COVID-19 coronavirus pandemic, opting instead for ‘social distancing’ policies and enhanced disinfecting programs.

On Thursday, Aussie casino operator Crown Resorts announced that it would tighten its restriction on the number of patrons allowed in individual food & beverage, banqueting and conference facilities at its Crown Melbourne and Crown Perth casinos from 450 to 100. Crown said the change was made following consultation with the state governments in Victoria and Western Australia.

Crown said all other previously announced coronavirus-related measures — deactivating every second gaming machine and electronic table game; enforcing distancing at seated table games, along with a ban on standing players; and restricting stand-up table games to five players apiece — would remain in place.

Crown is also providing alcohol-based hand sanitizer to staff and customers, while engaging in more frequent and strengthened cleaning measures. But Crown’s insistence on remaining open, while casinos in other markets have closed their doors, has prompted some local wags to joke that state governments have designated Crown a ‘provider of essential services.’

Crown’s local rival The Star Entertainment Group has enacted similar virus-mitigation techniques, and announced Wednesday that it would shut its three casinos for four-hour periods each day to conduct “comprehensive cleaning procedures.” The company added that it would “adhere to any direct advice we receive from governments” regarding its operations.

SkyCity Entertainment Group, which operates casinos in both Australia and New Zealand, has implemented many of the same measures. However, while it cancelled “a number of large public events,” events at its SkyCity Theatre and in convention spaces were still being “reviewed with booking partners” and all of its restaurants were “operating as usual.”

SkyCity CEO Graeme Stephens thanked casino guests for being “very supportive of the changes we are making and we thank them for their ongoing understanding.” Stephens also noted that SkyCity has a new online casino that was unaffected by the pandemic.

Only time will tell whether this strategy of doing the bare minimum required and hoping for the best will prove to have been a bad bet for both guests and operators.