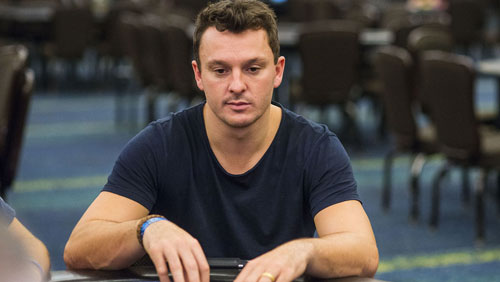 After toppling 57 opponents, Sam Trickett took down the second event of the partypoker LIVE MILLIONS Super High Roller Series which is taking place all this week in Sochi, Russia. Trickett, Britain’s second-most successful tournament player in history behind Stephen Chidwick put in a great display to beat a final table full of wizards and bank an impressive $435,000 to boot.

It was the second-biggest biggest win so far on this weeks’ worth of huge Super High Roller events, with Trickett’s win for $435,000 coming on the back of Jiang Xia He’s win in the opening Short Deck event for $378,000 saw He beat WSOP Main Event champion John Cynn heads-up. In the third event of the series, Wai Leong Chan won against recent Global Poker Award winner Paul Phua to take home the $457,500 top prize.

Event #2 got headlines, though. Packed with top poker professionals, the bubble burst at the end of Day 1, with Aleksey Gortikov’s elimination setting the final nine in place to battle for the win.

It was the battle of the haves and have-nots in terms of chip stacks and the man with the shortest stack, Webster Lim, would be first out. He was swiftly followed out of the door by the second of the three Malaysians at the final table as Paul Phua departed in 8th place. Phua’s pocket jacks were no good and Phil Ivey was next to bust, his pocket queens faring no better as Matthias Eibinger managed to get there with king-ten suited.

Artur Martirosyan was unable to nurse his stack any longer and made his way from the table after his all-in move with jack-ten suited failed to improve against the call of Trickett with ace-four.

With five left, Canadian player Timothy Adams couldn’t last any longer, after a clash with Ivan Leow left him short on chips, it would eventually be the Malaysian who busted him. With four players remaining, it took time but the blue touch paper was lit by Adrian ‘The Matador’ Mateos, who doubled up his shorter stack then busted in the course of just two hands. All-in with king-eight, Mateos couldn’t do the double-double as Sam Trickett called it off easily with pocket aces and held to reduce the field to three, scoring a vital knockout of one of the most dangerous players left in the tournament.

It would be the Pokercode co-creator Matthias Eibinger who busted next, as the Austrian powerhouse also saw his hopes derailed by Trickett, king-high eventually falling to Trickett’s Broadway straight on the river.

Heads-up, Trickett managed to take down the challenge of Leow, as he went into the final hand ahead in chips but all-in behind. Holding ace-four offsuit, Trickett’s opponent Leow held ace-queen, but saw Trickett four-flush him on the river as the four of spades made five to end the event in the British player’s favour.