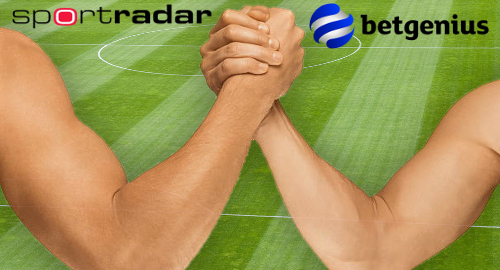 Sports betting data provider Sportradar has filed a formal complaint against rival Betgenius for bogarting UK football data, while a new Russian bookmaker appears to be piggybacking on Sportradar’s brand.

On Wednesday, Sportradar announced that it had “served legal proceedings” against Betgenius and Football DataCo (FDC) “in relation to the current structure for the licensing and distribution of live data from FDC football leagues for betting purposes.”

Sportradar said it had embarked upon this legal action “with reluctance” and only after finding it impossible to find “a fair solution that enables it to build its own database and to compete effectively” in the markets in which FDC is the big data daddy.

Last May, Betgenius inked a multi-year deal with FDC, which holds the rights to data from the English Premier League, English Football League and Scottish Professional Football League. The deal provided exclusive access to what Genius Sports Group CEO Mark Locke called “some of the most valuable sports betting content in the world.”

Sportradar claims that “the system put in place by Betgenius and FDC does not allow” third parties to pay for access to FDC data –something Sportradar claims it was willing to do – and thus the Betgenius-FDC deal is “in breach of UK and EU Competition Law.”

Betgenius has made Western Hemisphere expansion a priority, but that may prove more difficult given that Sportradar holds an exclusive betting data deal with the National Football League. With Sportradar insisting that it remains “open to the possibility” of a resolution with Betgenius, a mutually acceptable détente may be the only way forward.

IS SPORTRADAR TAKING BETS IN RUSSIA?
Sportradar may need to prepare another legal complaint, assuming its business is unrelated to the company of the same name that was issued a Russian bookmaking license on Valentine’s Day, according to the official register of Russia’s Federal Tax Service.

Sportradar LLC was registered in 2018 in Vladivostok and lists one Alexander Yuryevich Selivanov as its director. Someone of the same name is a former National Hockey League player who currently coaches the Kontinental Hockey League’s Admiral Vladivostok team.

The 2018 registration was done under the name of a Cyprus-based firm called Magandini Holdings Ltd, which was incorporated in 2016 but of which little else is known. Sportradar LLC’s main activity is listed as betting, with secondary activities in lottery ticket distributing and the hotel and restaurant sectors.

Sportradar became an official sports data partner of the Russian Football Premier League in 2015 but we’re going to go out on a limb and suggest that all its exposure to betting operators hasn’t convinced it that the grass is greener on the bookmaking side of the data fence.