LAS VEGAS (Feb. 20, 2020) – D.C. United and Caesars Entertainment (NASDAQ: CZR) have announced a strategic partnership commencing at the beginning of the 2020 MLS Season. The partnership, the first-of-its-kind in MLS, will see the global casino-entertainment company feature its “Caesars Sports” logo on D.C. United jerseys in addition to other sponsorship activations at Audi Field. 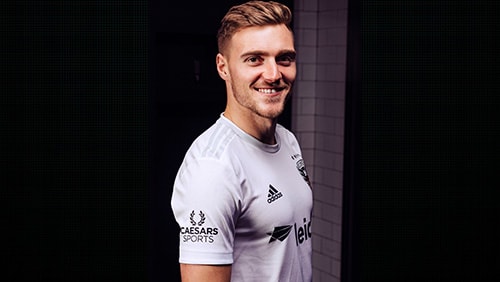 In only the second announced sleeve branding deal in MLS, and the first to feature a casino-entertainment company, the partnership will see the Caesars Sports logo prominently displayed on the sleeve of D.C. United jerseys for both home and away matches.

The partnership will include a number of Game Day activations at Audi Field, including promotional giveaways, LED signage, special match moments, and suites for usage during D.C. United home games and Audi Field events. In an effort to support the dream of turning Audi Field into a year-round hub of entertainment in the Buzzard Point community of Washington D.C., multiple entertainment and bar/restaurant concepts are being considered, including Caesars Entertainment hosting events in the stadium itself.

“We are extremely excited to announce this partnership with Caesars Entertainment, who are truly best-in-class in their field,” said D.C. United Co-Chairman Jason Levien. “Partnering with Caesars provides us with a great opportunity to realize the dream of Audi Field being a year-round hub of entertainment and activity and is another strong indication that global brands continue to see value in partnering with our organization. We are truly thankful that Caesars has decided to partner with D.C. United on this landmark deal in the Washington, D.C.”

One of the founding clubs of Major League Soccer in 1996, D.C. United are one of the most decorated teams in the United States with 13 domestic and international trophies.

D.C. United have called the District home for the past 24 seasons and continued that tradition when they moved into their new state-of-the-art and soccer-specific stadium, Audi Field in Buzzard Point, Southwest D.C., in July 2018.

Beyond being a soccer stadium Audi Field hosts over 100 events year-round ranging from corporate meetings, receptions, galas and festivals. Audi Field is also home to the XFL’s D.C. Defenders, Premier League Lacrosse and the art, culinary and music festival – Unite The District Fest.