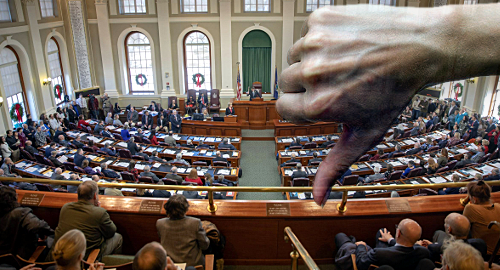 Maine’s legal sports betting hopes have been cruelly dashed once again as the state’s legislators failed to override their governor’s veto of betting legislation.

Tuesday saw Maine’s House of Representatives vote 85-57 in favor of overriding Gov. Janet Mills veto in January of the LD553 sports betting bill the state’s legislature had approved last summer. But overriding the veto required the support of 2/3 of each of the state’s legislative chambers, meaning 95 House members needed to vote ‘aye’, so this is a proper ve-no.

Last week, Maine’s state senate managed to achieve that 2/3 benchmark, albeit just barely, by voting 20-10 in favor of telling the good governor just how wrong she was to declare that Maine wasn’t ready to “join the frenzy” of states legalizing sports betting. It was the first time either of the state’s legislative bodies had successfully voted down a Mills’ veto.

Following the senate’s vote, local media reported that Republican senator Lisa Keim, who voted in favor of the override, hadn’t actually meant to vote ‘yes’. According to some other senators, by the time Keim had communicated her mistake to the Senate president, the bill was on its way to the House and, like an intercontinental ballistic missile, couldn’t be recalled.

Following those reports, Mills reportedly began working the phones to lobby House members to vote against the override. Mills was reportedly assisted in this effort by the state’s two casinos and its off-track betting operators, who objected to the betting legislation’s authorization of out-of-state mobile betting operators with no requirement to partner with a land-based venue.

Reaction to Tuesday’s vote has been mixed, with anti-betting advocates rejoicing while betting boosters are vowing not to give up their quest. However, Maine’s bettors will now have at least another year of waiting for their elected representatives to take another stab at passing betting legislation.