The PGA Tour will head to Florida at the end of the month, and when the Tour shifts to the American southeast that means the Masters isn’t too far away. The first and most prestigious major championship tees off on April 9 at Augusta National in Georgia. The Masters is the only one of the four Grand Slam events that is held at the same course every year. That somewhat helps in terms of handicapping the tournament. 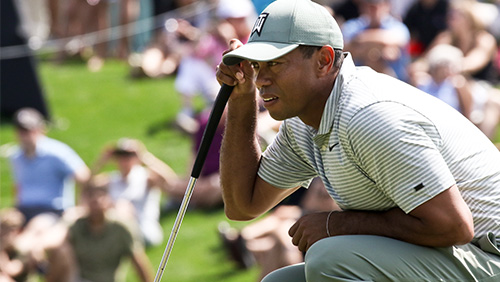 Bettors don’t have to wait until the week of the tournament to bet on the Masters. Futures odds have been up for months and will continue to be every week; however, they will certainly change some depending on how guys are playing or potential injuries, etc.

Brooks Koepka, who just lost his world No. 1 ranking to Rory McIlroy, plays his best in major championships and is the +800 favorite to win the Masters. Koepka won the U.S. Open in 2017-18 and the PGA Championship in 2018-19 but has yet to win the Masters or British Open.

Northern Ireland’s McIlroy is +900 to win a green jacket for the first time and complete the rare career Grand Slam. Rory was in command of the 2011 Masters entering the back-nine on Sunday but imploded and finished with an 80 and T15 result. McIlroy has three Top 10s at Augusta, most recently a T5 in 2018.

Tiger Woods is +1000 to win the Masters a sixth time, which would tie Jack Nicklaus’ record. No tournament matters more to Tiger than this one. Woods hadn’t won a major since the 2008 U.S. Open before his stunning victory last year at Augusta.

Through 54 holes in 2019, Tiger was two back of Italy’s Francesco Molinari. However, Woods shot a final-round 2-under 70 to finish at 13-under 275 and one ahead of Koepka, Dustin Johnson and Xander Schauffele. In all 14 of Tiger’s previous major wins, he was either tied or in the lead after 54 holes.

Johnson and Spain’s Jon Rahm are both currently set at +1200 odds to win their first Masters. As noted above, Johnson was one of the runners-up a year ago and also has been fourth and sixth at Augusta. DJ missed the 2017 Masters when he was No. 1 in the world due to an injury suffered the day before the first round. Rahm’s best result in his three Masters was fourth in 2018.