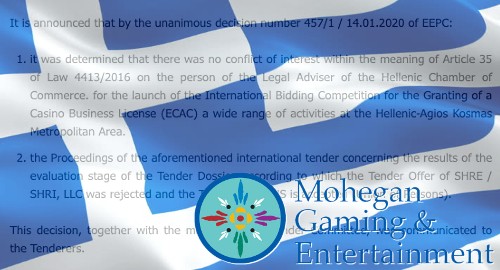 Late Monday, Greece’s Hellenic Gaming Commission (HGC) officially notified the two candidates regarding its decision to award the license to operate gaming at the €8b Hellinikon project on the site of Athens’ former international airport to a consortium that included MGE. The two companies were the only ones bidding for the project’s 30-year casino license.

Last week, word leaked that HRI’s bid would be disqualified, allegedly over concerns that HRI lacked experience in building a project this vast and doubts over HRI’s financial capacity to see the project through. HRI has strongly rejected these allegations and made its own allegations regarding the HGC having the fix in for MGE from the start of the bidding process.

HRI had filed an objection regarding a potential conflict of interest due to a legal advisor of the Hellenic Chamber of Commerce having ties to one of MGE’s consortium partners. But the HGC’s Monday notice said it had “determined that there was no conflict of interest.”

The notification of both candidates officially starts a 10 working day window in which HRI can mount a legal objection to the HGC’s decision with the arbitration authority, which will then have a month in which to consider the matter. HRI has yet to comment on the HGC’s announcement but the company previously vowed to file such an objection. HRI may also ask Greece’s Council of State for an injunction to freeze the tender process while HRI pursues legal remedies.

MGE and its local development partner GEK Terna have dubbed their proposed gaming venue Inspire Athens, which reportedly carries a €1b price tag. Primary developer Lamda Development, which is contractually prevented from starting work until the casino license question was resolved, hopes to put shovels into dirt early this year.