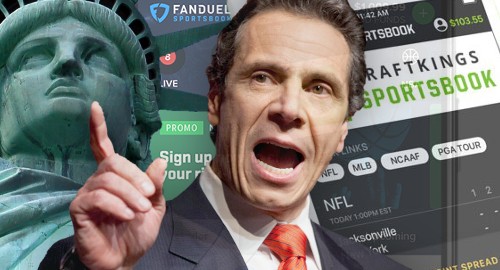 New York’s sports bettors will likely have to wait at least another year to enjoy online and mobile wagering if their governor’s latest budget address is any indication.

On Tuesday, Gov. Andrew Cuomo revealed his annual budget proposal for the state’s fiscal 2021, which included a plan for a modest expansion of the current legal sports betting market.

As it stands, wagering is confined to four upstate commercial casinos and a number of tribal gaming venues. But their action is confined to the venues’ dedicated ‘sports lounges’ and no online or mobile wagering is permitted, meaning any would-be bettor has to physically travel upstate — or, more likely, to New Jersey — to get their gamble on.

Cuomo’s modest proposal is to authorize wagering beyond the physical boundaries of the casinos’ sports lounges, meaning the books could install additional betting windows or possibly automated wagering kiosks at other points on the property.

Cuomo has consistently voiced his belief that permitting online wagering would require enacting a constitutional amendment, a view that’s not shared by the likes of state Sen. Joseph Addabbo Jr. and other betting proponents.

While Addabbo had held out hope that the governor would have a mobile wagering epiphany, Cuomo’s budget address made it clear that he was through relying on “gimmicks” that promised lofty projections from “creative although irresponsible revenue sources” that never seem to arrive.

New York’s authorization of the upstate commercial casinos in 2015 has so far proven a commercial bust, with some venues generating only half the revenue they’d originally projected and others choosing dramatic corporate restructuring to avoid having to declare bankruptcy.

Cuomo’s budget address isn’t the final nail in mobile betting’s coffin, as we’re now in for a couple months’ worth of haggling between the state’s legislative chambers to hammer out a mutually acceptable budget compromise by April 1. There’s also the slim hope of the legislature passing standalone digital wagering legislation before their current session concludes on June 2.