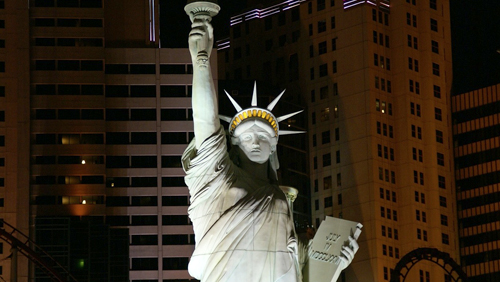 With sports gambling now being legal in New York and the NFL season finally getting underway, everyone has been watching to see what results would be coming. As predicted, sports gambling is proving to be very popular in the Empire State and, although the Jets and the Giants couldn’t find a victory, the casinos certainly did. Numbers, both visitation and win, at the four upstate casinos shot through the roof thanks to sports wagers and the NFL.

One of the casinos, Rivers Casino in Schenectady, did particularly well. It told an ABC News affiliate that the first week of NFL gambling was “smooth and successful” as it saw the number of patrons double, possibly triple, the usual Sunday turnout. With a 53-foot by nine-foot LED video wall displaying the gridiron action, it’s not too surprising. That type of screen is a man-cave dream.

Resorts World Catskills, Tioga Downs and del Lago Resort Casino also report turnouts that were higher than normal. The venues’ sportsbooks were all bustling, which also resulted in some spillage onto the gaming floors.

It goes without saying that three New York teams hitting the field on the same day would have attracted a lot of wagers. Unfortunately for some gamblers – but fortunate for the sportsbooks – the Jets and the Giants couldn’t quite find their rhythm. Both teams were favored to win heading into the contests, but the Giants fell 35-17 to the Dallas Cowboys and the Jets lost to the third New York team, the Buffalo Bills.

The results of the matches made the casino owners happy. They gave them a boost in revenue, which was very much needed, and should mark the start of an entirely new era of money-making activity. With the del Lago having a rough time and Resorts World Catskills not doing any better, any extra income is welcome.

This is just the beginning, too. New York lawmakers are on break, but sports gambling will be a major topic of discussion when they head back to the office in January. Online sports wagers will be considered, as well as the possibility of allowing sportsbooks at the state’s eight racinos. Governor Andrew Cuomo has already voiced his opinion on the matter, stating that it isn’t possible without a constitutional amendment, but perhaps legislators can find a way to sway his position during their off-season.