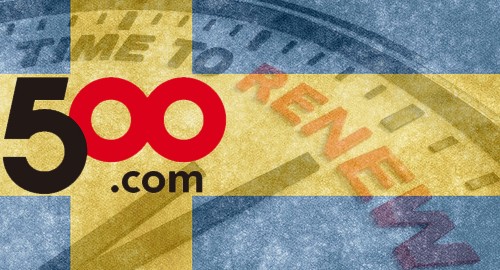 Online gambling operator Global Gaming hopes a court review will resuscitate its revoked Swedish license while 500.com has been forced to suspend its Swedish activity after failing to renew its license on time.

On Tuesday, Global Gaming 555 AB announced that the Administrative Court of Appeal in Jönköping had agreed to review a court ruling centered on last June’s revocation of the company’s Swedish gaming license by the country’s Spelinspektionen regulatory body.

The regulator revoked the license after determining that Global Gaming’s Ninja Casino brand had failed to demonstrate sufficient compliance with Spelinspektionen’s anti-money laundering and social responsibility rules. Global Gaming’s attempts to appeal the revocation have so far been unsuccessful, including the most recent court ruling last November.

Global Gaming CEO Tobias Fagerlund said Tuesday that his firm was relieved by the Jönköping court’s willingness to review the November dismissal of Global Gaming’s appeal, adding that the company continues to view the license revocation as “disproportionate and incorrect.”

Global Gaming’s business has been devastated by the license revocation, resulting in its third-quarter revenue falling more than 75% and forcing the company to axe half of its employees.

Speaking of struggling, Chinese operator 500.com announced Tuesday that its Malta-based online casino brand MultiLotto had been forced to suspend its Swedish operations after failing to complete the renewal of its local gambling license before the expiration date. 500.com said it hopes to resume its Swedish operations by “mid-February.”

500.com, which is currently embroiled in a major political bribery scandal in Japan, said that the suspension of its Swedish-facing operations will “materially and adversely impact” its Q1 2020 financial results. MultiLotto accounted for 99.1% of 500.com’s overall revenue in Q3 2019 and over three-fifths of MultiLotto’s revenue came from Sweden.

500.com formerly operated online sports lottery products in China but that business has been on hold since 2015, when Beijing ordered the ‘temporary’ suspension of online lottery sales. 500.com acquired MultiLotto’s parent company The Multi Group in 2017 in a bid to generate some revenue while it awaited the resumption of its Chinese operations.