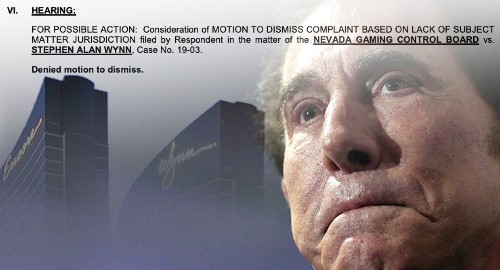 Nevada gambling regulators insist they have every right to impose penalties on disgraced casino icon Steve Wynn, even if he’s no longer involved in the state’s gaming industry.

On Thursday, the Nevada Gaming Commission (NGC) unanimously ruled that it had the necessary jurisdiction to impose sanctions on Wynn Resorts founder Steve Wynn, who was forced to resign from the company last spring following a seemingly endless parade of sexual harassment allegations involving the company’s female staff.

Steve divested himself of his considerable holding in Wynn Resorts shortly after his resignation, which in Steve’s mind effectively ended his ties to Nevada’s gaming industry. As such, Steve’s attorneys have pushed back on Nevada regulators efforts to declare Steve ‘unsuitable’ to hold a state gaming license and fine him up to $500k for bringing Nevada’s gaming industry into disrepute.

Not so, according to the NGC, which on Thursday emphatically stated that it had the authority to punish Steve for besmirching the state’s good name. Commissioner John Moran said the NGC “have the power to look at acts and conduct that is alleged, no matter who leaves and at what point.”

Other commissioners pointed out that Steve was still involved with his former company at the time the alleged harassment occurred. Deputy state attorney general Steve Shevorski warned the NGC that letting Steve skate would set a dangerous precedent for future offenders who might opt to shed their Nevada ties the moment they face possible punishment for activity that could negatively reflect on the sector.

Steve’s attorney Donald Campbell argued that “there is nothing for the commission to revoke,” insisting that Steve has “no intention to re-enter gaming in Nevada or anywhere else in the world.” Following the NGC’s vote, Campbell told reporters that Steve’s camp would appeal the ruling to the state Supreme Court.

Steve has vehemently denied the allegations made against him but recently contributed $20m to help Wynn Resorts settle shareholder lawsuits accusing senior management of helping to cover up Steve’s alleged failings. Wynn Resorts has also been subject to record fines of $20m in Nevada and $35.5m in Massachusetts for its role in this ongoing debacle.