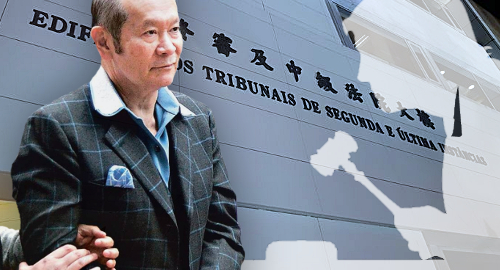 The nephew of Macau casino icon Stanley Ho has been sentenced to eight years behind bars for his role in a prostitution ring at the Hotel Lisboa.

In March 2016, Macau’s Court of First Instance sentenced Alan Ho Yao Lun to 13 months in prison after finding him guilty on a charge of sexual exploitation. Ho (pictured) was arrested in January 2015 after police uncovered a massive prostitution operation being run out of the Hotel Lisboa, which is owned by the parent company of Macau’s original casino operator SJM Holdings.

The prostitution ring operated under the title of Young Single Ladies and reportedly occupied over 100 rooms on the fifth and sixth floors of the Hotel Lisboa. Prostitutes, acting as freelancers, would pay the hotel around US$22,800 per year for the right to operate in the hotel without too much interference.

Having already served 14 months in police custody awaiting trial, Ho was released following his original sentence. But prosecutors weren’t satisfied that justice had been served, so in April 2016 they filed charges of criminal association and exploiting prostitution activities against Ho and five other defendants in Macau’s Court of Second Instance.

On Monday, the Macau News Agency reported that the Court had sided with prosecutors, increasing Ho’s sentence to eight years. Kelly Wang, assistant manager for the Young Single Ladies operation, saw her sentence increased to six years. Two other defendants were handed five-year sentences, while another received four years and eight months.

Ho was believed to have left Macau following his release in 2016 and it’s unclear whether a global manhunt will be required to ensure he serves his new sentence.

The 2015 dismantling of Ho’s prostitution ring came just months after the first visit to Macau by China’s President Xi Jinping. Several other high-profile prostitution busts followed shortly thereafter. Xi is scheduled to pay his second visit to Macau later this month. Macau’s pimps would be well advised to get out now while the getting’s good.