The temptation of being able to walk away with $17,000 in casino chips from the Oaklawn Racing Casino Resort in Arkansas was too much for a recent patron. The resort, located in Hot Springs, is a popular destination for area residents and is currently undergoing a major expansion project that the would-be thief might have imagined would provide a decent distraction. Taking his cue from previous attempted heists at casinos in Las Vegas, the gambler grabbed as many chips as he could and made a run for the door. Unlike many of those Vegas escapades, though, he actually made it outside and into the wind – just not for long. 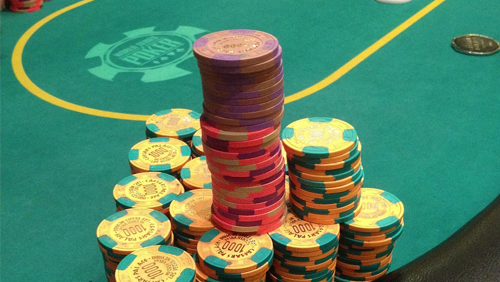 Derrick Patrick Belton Jr. was playing blackjack at the casino last Friday when he decided to pull off his caper. He was reported to have stolen several purple poker chips from the casino, each with a value of $500, from a rack that was sitting next to a dealer before making his grand getaway.

The plot was doomed from the start. As if casino patrons weren’t already aware, the properties have cameras and surveillance equipment all over the place. Security is often tight at all venues, but not so much in certain instances. For example, casino regulars aren’t scrutinized as much as first-timers since they’re known to staff. That familiarity should be enough to keep those regulars honest, but not always. Belton was a regular and even had a player’s card from the casino, according to the Hot Springs Sentinel-Record. It isn’t clear how well he was doing at blackjack, since he apparently can’t put two and two together.

Security personnel from the casino shared video and camera stills with police that showed Belton performing his act. With so much evidence, it was one of the more rapid investigations into a casino theft in recent history, and Belton was picked up this week. He was released after paying bond in the amount of $3,500 and will return to court on December 10 to learn his fate. If the judge decided to throw the book at him, he’s looking at as many as ten years behind bars.