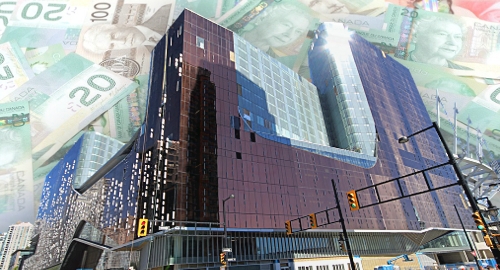 That table shrinkage mirrors the most recent annual report released by the British Columbia Lottery Corporation (BCLC), which showed that revenue from land-based casinos – which are owned by the province but managed by private companies – in the 12 months ending March 31 was flat at C$1.9b. Slots were up 2.6% while table games slipped 7.8% from the previous year.

Since January 2018, BC’s casino industry has faced stricter ‘source of funds’ requirements for transactions over C$10k. The change followed a flood of reports of sketchy commitments to anti-money laundering protocols at some Vancouver-area casinos, including the Great Canadian Gaming-managed River Rock Casino Resort.

BIV’s stats show River Rock leading all BC casinos with revenue of C$323.7m in 2018, a 22.9% decline from its 2014 haul. However, among the province’s top-five casinos, River Rock’s tables scored highest in terms of table revenue, averaging $1.7m per table.

Parq has struggled to turn a profit since its September 2017 opening but found a new sugar daddy this spring. Local by-laws restrict Parq’s gaming floor to 600 slots and 75 tables, but the BIV survey shows that these gaming positions are punching well above their weight.

Parq may have only half the slots portfolio of its rivals but each of these slots earned C$145,741 in 2018, higher than any of the other top-five venues. Parq is also the only casino in the province to generate a higher share of revenue from tables than slots.

Slots and eTable revenue may head lower on a province-wide basis after BCLC announced its new PlayPlanner time and budgeting tool for members of the Encore Rewards program. PlayPlanner not only allows players to pre-commit to time and spending limits, it also generates on-screen notifications as players near those pre-set limits. Similar tools have been available on BCLC’s online casino PlayNow.com since 2004.