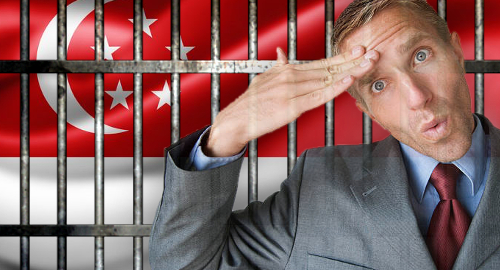 An online gambler in Singapore has been spared a jail sentence for daring to wager with a site not licensed to operate by the city-state.

On Monday, local media reported that Singapore’s High Court had handed down a ruling last month lifting the two-week jail term imposed on Lau Jian Bang, who was convicted in January on two counts of gambling with an internationally licensed online gambling site.

Playing with unauthorized sites was outlawed in 2015 following passage of the Remote Gaming Act (RGA). The following year, the state-run Singapore Pools and the Singapore Turf Club were officially granted exemptions from the RGA and the two sites launched in October and November 2016, respectively. (Pools has since taken over running the Turf Club site.)

Lau placed a total of 13 bets worth SG$39k (US$28,600) with an unspecified gambling site over two days in October 2016. Lau subsequently placed more bets that brought his total outlay to SG$50k. He was found guilty and ordered to serve a two-week jail sentence for each conviction, with the sentences to run concurrently.

In July, Lau appealed his conviction based on his belief that the sentence was excessive and that a high fine or community service was more appropriate. Lau’s attorneys argued that he was merely an end user and that Singapore’s approval of the two state-run sites indicated that online gambling wasn’t the great evil that prosecutors were claiming.

Justice Aedit Abdullah ruled that Lau should be spared jail time and instead be required to pay the maximum fine of SG$5k for each of his two convictions. Aedit said his view of harm caused by violations of the RGA was “not such as to attract imprisonment as a matter of course for first-time offenders.”

Aedit allowed that repeat offenders might need harsher measures, but suggested the courts should start with a SG$1k fine for first offenders, with penalties rising based on the size of the wagers to a level that would ensure the penalty was sufficient to deter future crimes.

Aedit rejected prosecutors’ arguments that a prison sentence was appropriate given that the scale of Lau’s wagering dramatically exceeded the maximum financial penalty. Aedit said it was up to Parliament to either increase the maximum fine or couple the existing fine with “instruction and education on responsible gambling.”