Lawyers are meant to have a good handle on a number of things, not the least of which is law – it is even included in their job title. However, a lawyer for the Las Vegas Review-Journal (LVRJ), currently facing a lawsuit by the Las Vegas Sun, seems to be misunderstanding that fundamental component. He has asserted in court that Sheldon Adelson, the owner of the LVRJ and casino giant Las Vegas Sands, isn’t the owner of LVRJ, even though it says so right in the newspaper. 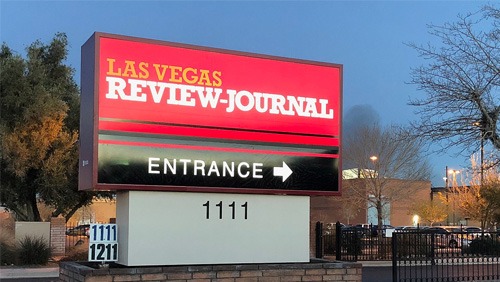 The Sun launched its lawsuit this past September, arguing that the LVRJ was suppressing the Sun’s media coverage in violation of a standing agreement between the two entities. The two are now in court giving their side of the story and LVRJ attorney Randall Jones is reportedly trying to finagle a way to keep the newspaper out of trouble.

He told Clark County District Court Judge Timothy Williams that Adelson and Patrick Dumont, Adelson’s son-in-law and LVS chief financial officer, don’t actually have ownership of the newspaper and, therefore, the two shouldn’t have to provide any electronic documents (email, etc.) that have been requested by the Sun because “we haven’t identified who the owners are of the [LVRJ].”

That’s an odd statement, given that the identification is found on virtually every edition of the newspaper printed. Any time an article is run that contains mentions Adelson’s name or the LVS, the paper includes a disclaimer that reads, “The Review-Journal is owned by the family of Las Vegas Sands Corp. chairman and CEO Sheldon Adelson.”

The Sun is claiming that the LVRJ is in violation of a standing joint operating agreement (JOA) between the two entities. That JOA was authorized by the federal Newspaper Preservation Act, and the Sun believes that LVRJ has intentionally taken measures to reduce the size of the Sun’s inclusion in the larger paper in an effort to push it out of the business. If this is the case, it asserts, LVRJ would be breaking its agreement and the Sun believes the decision came directly from Adelson and his gang.

Jones has also tried to argue in court that the real owner of the newspaper is News + Media Capital Group, LLC and told the judge, “[The Adelsons] are third parties. There’s another entity, News + Media, so, technically, I think there would have to be a subpoena to that entity. I’m happy to have a meeting to look at this and see what evidence they have to show that Mr. Adelson or Mr. Dumont are implicated in the redesign of the Sun box.”

That should be a pretty easy meeting to arrange. According to the “About the Owners” section that has been included in the print version of the newspaper, ‘The Las Vegas Review-Journal is owned by the family of Sheldon and Miriam Adelson through their controlling interest in News + Media Capital Group LLC. … Their various interests will be disclosed when relevant in stories throughout the Review-Journal, reviewjournal.com and the newspaper’s mobile applications.”

Williams thanked everyone for their time and concluded the initial appearance. He added that he would decide “at a later date” which LVRJ principals would be required to submit electronic material in relation to the case.