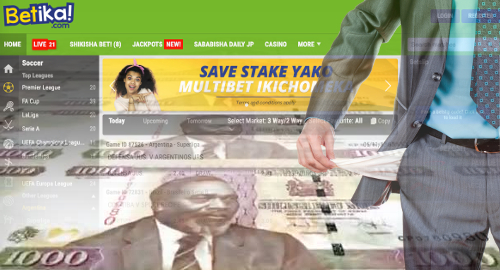 The KRA has written to two local banks – KCB Bank Kenya and Guaranty Trust Bank Kenya – where Betika holds commercial accounts, seeking to compel them to fork over Betika’s alleged arrears. Betika’s parent company Shop & Deliver has filed papers with the Tax Appeals Tribunal seeking to block the KRA’s claim on the cash.

Betika was not among the 27 betting operators whose gaming licenses were suspended on July 1 based on the KRA’s claims of hundreds of millions of dollars in unpaid taxes. Betika was also among the first Kenyan-licensed betting operators to begin deducting the government’s controversial new 20% tax on betting turnover.

Betika’s tax appeal stated the risk to its ability to continue operating should the government be allowed to pull the cash from the company’s accounts. That claim shouldn’t be taken lightly, given the recent shuttering of several local betting giants who also fell victim to the KRA’s tax demands.

In September, market leader SportPesa announced that its disputed tax arrears had left the company no option but to close its local operations. Kenya’s second-biggest betting operator Betin closed its local operations that same month. In October, SportPesa issued redundancy notices to over 400 local staff.

Last week, local media reported last week that SportPesa had summoned some of its sacked staff to their former place of work, where they would be informed of the company’s “next step.” However, upon arrival the staff were told their presence was only so that the company could issue “proper and legal notices” of termination.

Until the KRA’s tax claim surfaced, Betika appeared to be striking all the right notes with local officials. Last month, Betika launched its new Betnika na Community program, which promised to spend millions of shillings funding local sports programs and educating youth on the benefits of participating in sports.

Betika also renewed its sponsorship of Kenyan Premier League team Sofapaka, a rare piece of good news in the KPL after SportPesa halted its significant football sponsorship spending in August.