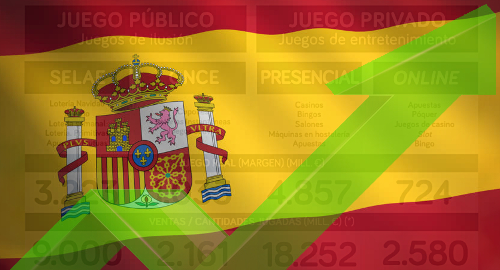 Spain’s gambling sector continues to grow but has yet to regain the heights it hit prior to the 2008 global economic meltdown.

The report claims Spain’s gambling market was worth €9.87b in 2018, representing 0.8% of the nation’s gross domestic product. That sum represents a 5% improvement over 2017’s result, and marks the fourth consecutive year of annual growth, but it’s still 15.6% below 2007’s pre-recession peak of €11.7b.

(This phenomenon isn’t limited to Spain. Even Nevada’s mighty casino sector has yet to regain its pre-recession form, as 2018’s total revenue was nearly $1b below its 2007 peak.)

Spanish-licensed online gambling was worth €724.4m in 2018, up nearly one-quarter from 2017. However, that represents a slower growth rate than the previous two years— +30.8% in 2017 and +34.4% in 2016 – according to figures compiled by Spain’s Dirección General de Ordenación del Juego (DGOJ) regulatory body.

Spain’s government collected tax revenue of €1.34b from gambling in 2018, while the gaming industry employed 85,047 Spanish residents, 55.4% of which were employed by the private sector.

Spanish gambling operators spent €412m on advertising in 2018, a subject that has become more delicate over the past year. Spain will hold general elections on November 10 and various parties have publicly mused about imposing a tobacco-style prohibition on gambling marketing.