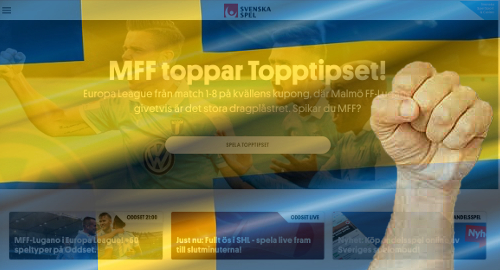 Figures released Thursday show Svenska Spel’s net gaming revenue hit just over SEK2b (US$207.2m) in the three months ending September 30, a 5% decrease from Q3 2018 and extending the company’s losing streak to nearly two years. Operating income was down 45.6% to SEK639m, with most of that decline coming via the 18% tax Sweden now imposes on online revenue.

In preparation for the new competitive market, Svenska Spel was forced to split its online and land-based operations into two distinct units and the digital ops are currently the company’s sole reason to celebrate. Online revenue rose 9% in Q3 to SEK737m, pushing digital’s share of overall revenue to 37%, up five points year-on-year and up two points from Q2 2019.

Overall, the Tur lottery unit reported revenue falling 2% to SEK1.12b, while the Sports & Casino division was also down 2% to SEK462m. The land-based Casino Cosmopol & Vegas unit fared worst, falling 16% to SEK429m, due to what the company called “customers’ move from physical play to online, but also by efforts linked to the duty of care and money laundering legislation.”

The company is taking steps to bolster its declining verticals, including hiring SBTech to provide a new multi-channel sports betting platform (set to launch next year) and adding more live online casino tables. The lottery division debuted Trisslott, a new ‘set for life’ game, and the company continues to refresh its land-based slot machines, with 3,100 of its 4,400 terminals upgraded so far.

Earlier this week, Svenska Spel announced a new online platform that will allow its retail agents to offer a variety of sports betting products via self-service betting terminals. Product manager Mathias Johansson said the aim was to allow punters to “buy a game from any store, no matter where you are in the country.”

Svenska Spel CEO Patrik Hofbauer copped to the fact that the company’s financial performance was “not yet at the level we are striving for,” blaming both new online competition and the local regulator’s insistence on all operators enhancing their responsible gambling efforts, although Hofbauer stressed that he supported these new regulatory boundaries.