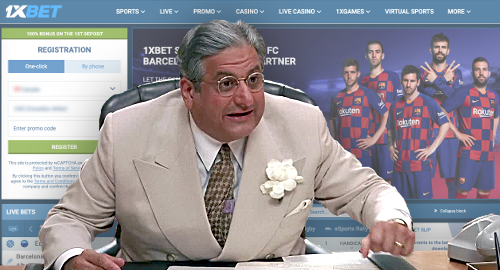 Russian online gambling operator 1xBet is believed to be the first online betting operator to make an appearance in Hollywood’s black book of digital piracy purveyors.

In late September, the Motion Picture Association of America (MPA) sent the US Trade Representative (USTR) a response to the USTR’s review of so-called Notorious Markets, its annual compilation of “online and physical markets that reportedly engage in and facilitate substantial copyright piracy and trademark counterfeiting.”

The MPA’s submission focused on “sites and services particularly illustrative of the current nature and scope of online content theft.” In the Ad Networks and Online Advertising Entities section, the MPA singles out 1xBet, an “online gambling giant” that uses piracy as “a vehicle” to support its operations. (In fact, 1xBet is the only firm listed in that MPA category.)

Specifically, the MPA says 1xBet “has started to support some of the earliest releases of infringing theatrical camcords and infringing streams of live television broadcasts.” The betting site “pays to insert visual and audio advertisements into new piracy content sources incentivizing camcord and livestreaming piracy” by ‘burning’ watermarks with promotion codes into pirated video files.

1xBet’s proclivity for promoting its offering via pirate videos is nothing new, but its promotional activities have ramped up dramatically of late, to the point that it was recently named Russia’s third-largest online video advertiser.

In September, Torrent Freak reported on stats provided by brand protection company White Bullet that showed 1xBet ads were “found on a regular basis” on 1,200 ‘pirate’ video sites over the previous six months.

At this point, we’re obligated to point out that the Curacao-licensed 1xBet.com is ostensibly a separate entity from 1xBet.ru, which holds a license to offer online betting in Russia. The non-Russian 1xBet recently ran into regulatory problems in the UK market, which forced the company to shut its UK-facing operation and resulted in several UK football clubs severing their sponsorship links to the company.