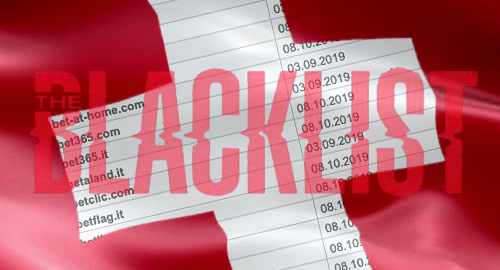 On Tuesday, the Swiss Lottery and Betting Board (Comlot) issued an updated blacklist of international online gambling operators who continue to serve local punters without local permission. The original list issued in early September contained 65 domains while the new list has bumped that number up to 81.

Switzerland’s Federal Gaming Commission (ESBK) issued its own online gambling blacklist in September and it contained numerous domains not included on Comlot’s chart. The ESBK has yet to update its blacklist this month.

Meanwhile, the ESBK has released a new survey of Swiss gambling behavior using data compiled for the Swiss Health Survey 2017 (viewable here, in German). Around 69% of the 18,832 respondents copped to gambling at least once in their lives in 2017, down from 70.6% in the 2012 survey.

While those international sites may have ranked dead last, the survey found that these sites scored highest (22.1%) in the number of ‘risky or pathological’ gamblers. The other highest risky/problem gambling verticals were sports betting (14.3%), followed by slots (13.8%) and table games (11.5%).

Regardless, the ESBK claimed the results supported the Swiss government’s efforts to restrict its citizens from accessing gambling sites not holding a Swiss license. The government’s new regulated online market officially took effect in January but the ESBK didn’t get around to issuing its first online permits until June.