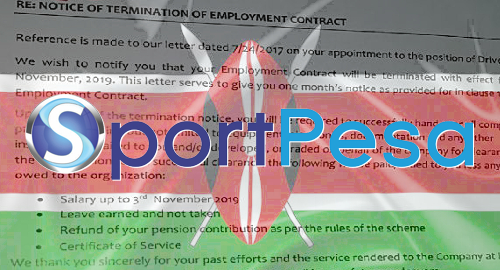 Sports betting operator SportPesa has dismissed all of its Kenyan staff after its tax fight with the government forced the closure of its local operations.

On Wednesday, Kenyan media reported that SportPesa had summoned the over 400 staff at its Nairobi office to a meeting at which they learned that the company would be letting them go as of November 3.

SportPesa CEO Ronald Karauri reportedly told employees that he was “disappointed” that the company’s long-running tax fight with Kenya’s government meant “this journey cannot continue” and he had no other option but to give them the statutory one-month’s termination notice.

SportPesa announced last weekend that it was closing its Kenyan operations due to the government’s unwillingness to scrap the new 20% tax on betting turnover. SportPesa, which was one of 27 Kenyan betting operators whose licenses were suspended in July over alleged tax arrears, thought it had reached an understanding with the government on the tax issue but soon discovered there were yet more hurdles to clear.

SportPesa is the second major betting operator to sack its entire Kenyan payroll, following the lead of Betin, which closed its local operations this weekend over the same tax issues.

SPORTPESA ASSURES LIVERPOOL THAT ALL IS WELL
As its tax fight with the government wore on, SportPesa halted all its sponsorships of local sports bodies, including the Kenyan Premier League and KPL clubs Gor Mahia and AFC Leopards. Both clubs have suggested their future existence is anything but assured without their sponsorship financing.

This week, SportPesa found it necessary to reassure the UK football clubs it sponsors, including Everton FC, that the company’s “global operations, sponsorship and partnership programmes … are not impacted by our decision to exit the Kenyan market. It therefore remains business as usual for SportPesa in Liverpool.”

On Wednesday, Genghis Capital analysts said betting accounted for 7% of M-Pesa revenue, and that revenue was likely to fall by Ksh4b-5b (US$38.5m-$48.2m) due to the betting brouhaha, which would push Safaricom’s annual growth rate down to 13.3% from 18.2% in H1, before the betting payment channels were banned.