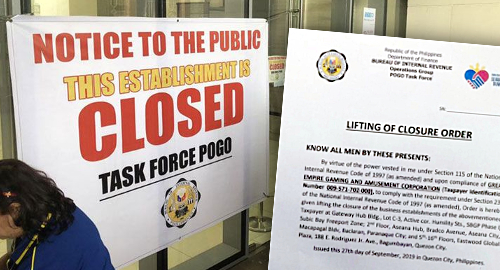 The BIR accused GEGAC of not paying its taxes by failing to register with the bureau for VAT purposes. The shutdown threw as many as 8,100 staff – many of them Chinese nationals – out of work, but the BIR now says that GEGAC is back in compliance with its obligations under the National Internal Revenue Code.

GEGAC, which resumed operations at its three offices on Monday, reportedly owes the BIR around P1.3b (US$25m) in tax arrears. The BIR reported that GEGAC has worked out a plan to pay P250m upfront and to remit the balance within the next three months through a series of post-dated checks. GEGAC has also agreed to update its withholding tax payments and register all its staff with the BIR.

This summer, the BIR launched a crackdown on POGOs it deemed to be skirting the rules regarding registering staff for taxation purposes. The government estimated that it was missing out on P2b ($39m) each month from the significant number of unregistered POGO staff.

In August, the government came under pressure from China, which was urging the Philippines to “ban all online gambling,” given that POGOs overwhelmingly cater to mainland Chinese gamblers. Philippine President Rodrigo Duterte ultimately decided to preserve the POGO sector based on the money the burgeoning industry was providing to the Philippine government.

Prior to Duterte’s pronouncement, the Philippine government launched a study of the financial impact of a potential POGO shutdown. On Tuesday, Philippines Central Bank Governor Benjamin Diokno declared that “I’d rather [POGO’s] leave” his country.

Diokno said that POGOs provide “some benefits, if terms of if they pay their taxes,” but also claimed that these benefits amounted to only “a few billion” pesos to the government’s annual budget. Meanwhile, POGOs also presented “a risk of money laundering,” and the self-declared “risk-averse” Diokno said he wouldn’t lament a total POGO shutdown.

POGOs’ tax contribution could rise if local pols get their way. The House of Representatives’ Ways and Means Committee is drafting legislation that could impose a “presumptive corporate income tax” of $1k per ‘seat’ (employee), a scheme that the government believes could boost its annual revenue by up to P76b ($1.46b).