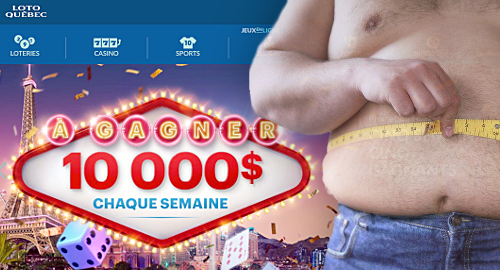 The online gambling monopoly in the Canadian province of Quebec reported annual growth of nearly one-quarter in its fiscal Q1, despite international interlopers continuing to claim around two-thirds of the market’s online revenue.

The mainstay lottery segment was blamed for most of the decline, thanks to a lack of bonus draws in its Lotto Max product. Lottery revenue was down 11.6% to C$216m, while the casino segment was basically flat at C$213m, as was the ‘gaming establishments’ division (VLTs in bars, bingo halls, etc.) at C$232.6m.

The Espacejeux online gambling site reported revenue rising 23.8% to C$29.2m, with gains in both online lotteries (C$7.5m, +7%) and casino products (C$21.6m, +31%). In July, Loto Quebec announced a three-year deal with Inspired Entertainment to supply Virtual Sports and other interactive casino content to Espacejeux.

Espacejeux’s internationally licensed competitors continue to irk Loto Quebec’s braintrust, who estimated this spring that Espacejeux might generate around C$150m in revenue this year, while international sites would claim around twice that sum. According to Le Journal De Quebec, Quebecers’ most popular sites include The Stars Group’s PokerStars, UK giant Bet365, LeoVegas and the Mansion Group’s SlotsHeaven.

Quebec’s government still hasn’t given up its fever dream of blocking the domains of these international sites, despite the courts having declared this plan to be unconstitutional. The provincial government has filed an appeal of last summer’s Quebec Superior Court ruling, although few legal eagles give the province much of a shot.

CHANGES AT THE TOP IN BC, MARITIMES
Meanwhile, the gambling body in Canada’s four easternmost provinces is looking for a new boss. The Atlantic Lottery Corporation announced this week that President/CEO Brent Scrimshaw is retiring after 13 years with the ALC, including eight years in his current role. A committee has been formed to identify his replacement, and Scrimshaw says he’ll stay on until that process is complete.

At the other end of the country, the British Columbia Lottery Corporation announced last month that President/CEO Jim Lightbody was taking medical leave to undergo cancer treatment. Current director Greg Moore has agreed to temporarily step down from the board to assume the role of interim President/CEO until Lightbody’s expected return in early 2020.