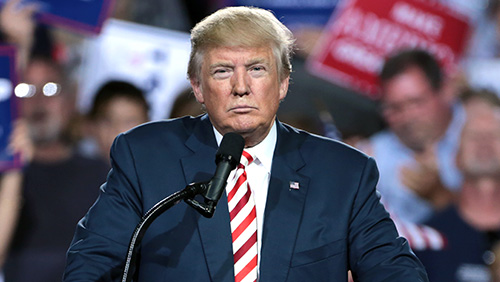 President Trump may end being a one-term president, despite the Democratic Party still not having a defined candidate that could take him on in next year’s election. With just a little more than a year remaining before the November 2020 polls open, the political race, and the gambling action that goes with it, is heating up. The odds would certainly go all haywire if Dwayne “The Rock” Johnson announced his candidacy, but he doesn’t expect to be ready for another four years.

Users of the online betting site PredictIt believe the Democratic Party will win next year’s presidential election. Democratic shares on the platform are currently at $0.57, while the Republican shares hover at $0.46. The William Hill sportsbook sees similar activity, with Democrats taking the White House at odds of 4/5 compared to the 10/11 seen by the Republicans.

The results have to be taken with a grain of salt. The U.S. prohibits sportsbooks taking bets on major political events, so all of the data is based in offshore viewpoints. The ban is designed to prevent voters’ opinions from being swayed because, as everyone knows, the Internet isn’t a global, internationally-accessible tool (he said with sarcasm).

Six Democratic candidates have decided to drop out of the race. The latest is Senator Kirsten Gillibrand, who handed in her I Quit memo this week. Prior to her departure Representatives Seth Moulton and Eric Swalwell already stepped away from the podium. Governors Jay Inslee and John Hickenslooper, respectively from Washington and Colorado, also backed off. A lawmaker from West Virginia, Richard Ojeda, is the other.

Their departures still leave several candidates in place. Senators Elizabeth Warren, Bernie Sanders and Kamala Harris are still in the running, as are former VP Joe Biden and the mayor of South Bend, Indiana, Pete Buttgieg. Looking at the current numbers, Warren is the favorite to take on Trump next year with PredictIt users giving her $0.33, and Biden follows with $0.27. From there, the numbers drop off considerably, with Sanders looking at $0.15, Harris at $.11 and Buttigieg at just $0.07. Buttigieg is also the next candidate expected to go, with his “drop out” shares sitting at $0.57.

Both political parties have seen a slight uptick in their numbers on PredictIt as the winner of next year’s election, so it seems that interest is increasing. It’s way too early to tell what will happen and, lacking domestic input, the results couldn’t be any further away from scientifically-derived data. However, they’re still fun to watch.