Home / Business / Trading the hurricane before Trump nukes it 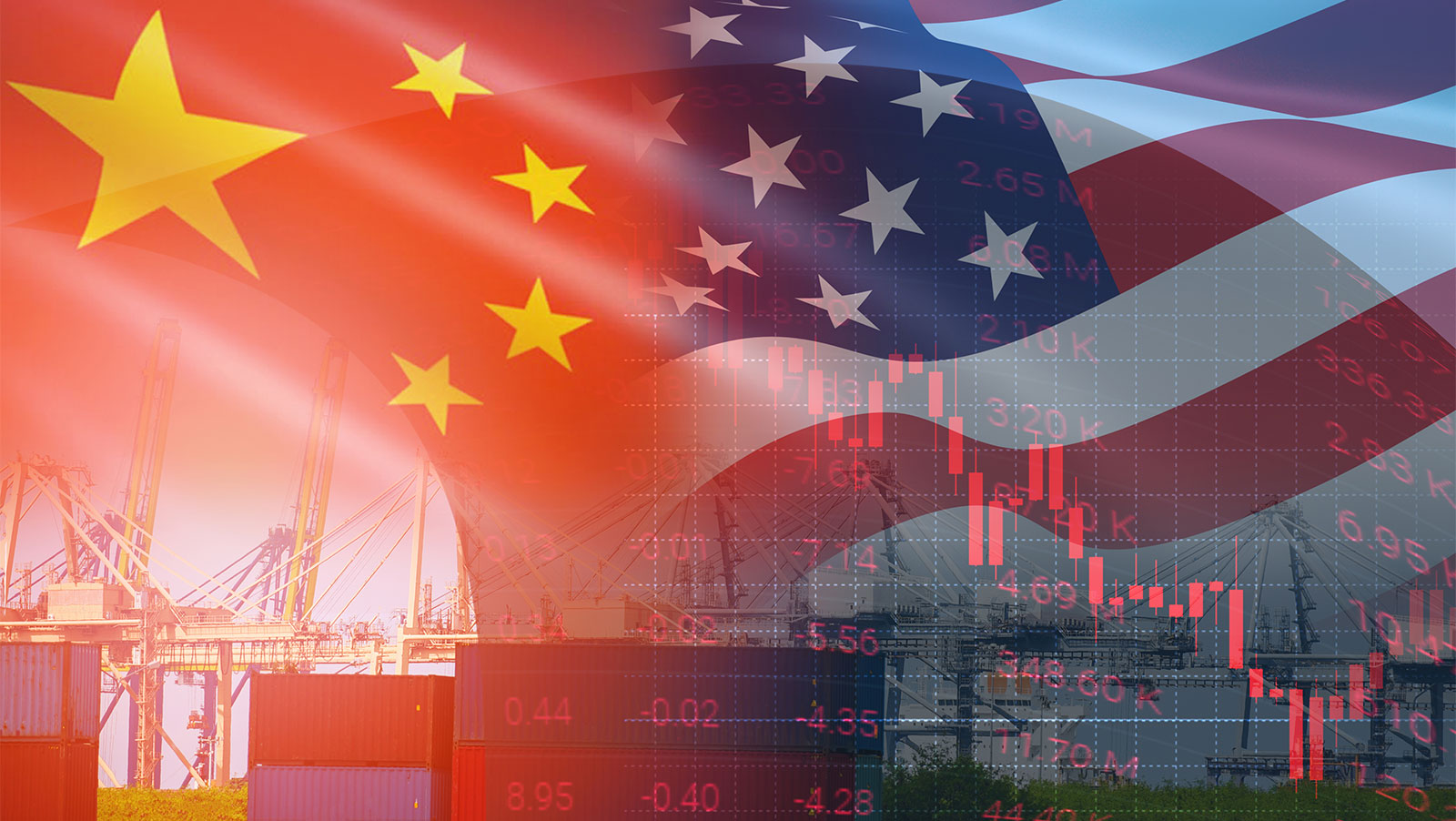 Thank goodness Donald Trump’s latest mental breakdown on Twitter happened over the weekend rather than during trading hours. If it did, we could have broken records on intraday volatility. Discourses on trading the markets increasingly feel like navigating people through hurricane-force winds in their underwear. (It’s OK though. Trump will nuke the hurricane so don’t worry.) How is this supposed to be done, when any tweet tantrum can pick up or put down a multitrillion dollar wave in just a few minutes?

There is actually a simple answer to this question. Establish what the trend should be through fundamentals, and then either buy the dips or sell the rallies. Last week, I said that now is the time to start loading up on U.S. gaming stocks, not all at once, but on the dips over the next 3 months because significant selling panics were possible. Well, we just got a selling panic at the end of last week, with a bit of a recovery yesterday.

After Trump’s latest bout of Twitter tariff diarrhea directed at China, U.S. stocks are down, and casino stocks have pretty much followed the Dow Jones and the S&P 500. The Dow fell 2.6% on Friday, the S&P 2.4%, and both MGM and Penn fell by similar percentages. Eldorado fell twice as hard at 5.4%, which should be expected considering Eldorado is more speculative. It’s a good time to add to MGM positions now. If you bought 1% last week, put another 1% in this week on the Trump breakdown discount.

I’m sticking to this dip-buying call because while we cannot predict day-to-day knee-jerk movements caused by presidential outbursts, there is good reason to believe that U.S. stocks will trend higher at least through the first quarter of 2020. As I’ve said before, the dollar supply growth rate is on the verge of an all-time record explosion higher scheduled for around December/January. Those dollars all have to land on something. It will eventually lead to high price inflation but stocks should see the first installments of the new money.

Meanwhile, the geriatric child that is Donald Trump will continue to run roughshod all over the international playground as the wide-eyed chaperones, only semi-sane as they are and who have never had to deal with something quite like this before, will continue smoking cigarettes in the corner, pretending they don’t notice, while they periodically rasp in frantic undertones at the loudmouthed bully to stop launching spitballs at the Asian boy. Did the Asian boy really call the White House last night? Did he not? It’s like watching some asinine middle school relationship drama about who called when and who broke up with whom except that trillions of dollars in daily financial flows ride on the news.

Alright, so we all just have to acknowledge for now that we are mere actors in some sadistic play orchestrated by a man of questionable mental stability who for all we know is unable to come to grips with his own mortality in his mid 70’s and could die any day.

But what about the trade war? Won’t that bring U.S. stocks down? Not any more than dip-buying opportunities at this point in my opinion, and here’s why. Elections. The trade war has to end relatively soon in one of two ways. First possibility, Trump capitulates while saving face and saying he won. He knows very well that his reelection depends on the stock market staying elevated and a generally positive perception of the U.S. economy. The more he carries on with this behavior, the greater the fears of a market crash and recession. This will feed on itself until Trump folds. Second possibility, he just keeps pressing it and goes out in a blaze of tariff glory, completely burying his chances of reelection and ushering in some Democrat who will almost certainly go back to the pre Trump status quo with China no questions asked, and the market bounces back.

But won’t that be later than the first quarter of next year? Yes, but there is no need for the trade war to actually end for U.S. stocks to fly higher in the meantime. Polls showing Trump losing to any Democratic challenger will accomplish the job just as well, because all Democrats will certainly campaign on the promise to end the trade war. Investors will start positioning themselves for this eventuality in advance. Joe Biden would be the best for the strongest bounce because he’s old school boring and far from radical and dangerous, at least insofar as today’s U.S. politicians go. If he wins Iowa and New Hampshire in February and the trade war is still going on, U.S. stocks are going to explode higher.

With Elizabeth Warren, a significant possibility not as much, because she has wonderfully efficient country-destroying ideas like free everything for everyone funded by absolutely nobody, which usually works out great. But there should still be a brief relief rally to new highs even in that case, just because there will be so much new high-powered dollars flowing in by then and the end of the trade war will be in sight.

On a side note, Warren would be extremely bad for the gaming industry longer term. She’ll go after it on her moralistic high giraffe, tax and regulate it and may even spearhead the reversal of some of the legalizations like sports betting we’ve seen recently in an effort to “fix things”.

Meanwhile, Xi of course does not need to be reelected. He can do anything he wants, wait it out, string Trump along, make him look progressively stupider and hang himself, whatever. Doesn’t matter. He does not need to concede anything at all.

What Trump does not realize is that on a cultural level, the Chinese are much better suited to adapting to economic crises. They’ve done it before, on levels horrifically worse than anything Americans have ever had to deal with in their history as a nation. If you thought the Civil War or the Great Depression or 2008 were bad, try mass starvation on a national scale. If the Chinese complain too loudly, Xi can quiet them in any way he wants. If Americans complain too loudly, Trump is toast.

In terms of positioning, positions in MGM, Penn, Eldorado and other U.S. gaming stocks should not exceed a total positioning of 20% or 25% of a portfolio just in case we are already there and stocks have indeed topped. A conservative trading system for these stocks could be something like for every 2% MGM and Penn fall, add 1%. For more volatile stocks like Eldorado, add 1% for every 4% fall. And don’t chase the up moves. Just let them ride. If you don’t get to full 20-25% positioning on buying dips, that’s fine, too.

If the U.S. is a buy then, why not Macau? Because Hong Kong is a totally different animal. It looks like it might soon be invaded, though I cannot figure out what Xi could possibly gain by doing so. It’s probably just a threat to get Hong Kongers to back off, at least I hope so. Trump is probably trying to goad him into invading so he has the excuse to clamp down harder on trade with the support of Americans. Xi would best just let the protests burn themselves out and do as little as possible offensively. They will eventually die down, because Hong Kongers have to eat and work and those sorts of things. If Xi invades, Macau and Chinese stocks are going to nosedive and it’s not worth the risk of holding them now.

Plus, the longer the protests continue, the greater the chances of the Hong Kong dollar peg to the U.S. dollar breaking, which would cause a collapse in Macau stocks. In order to maintain such a peg in the midst of protests which disrupt productivity, Hong Kong’s central bank would have to relatively reduce the Hong Kong dollar supply, which would negatively affect Hong Kong stocks anyay. So whether or not the peg breaks, the longer the protests continue, the greater the chance of a freefall in Macau shares.

Shorts on Melco and Galaxy established August 6 are still a wash right now, but keep holding them if you took the trade. The yuan keeps falling in the meantime so we could be on the verge of a selloff.

Let’s wrap this up then with a quote from Dave Barry, who visited Hong Kong back in 1992 and wrote this about his visit in his book Dave Barry is not making this up:

So in a little over five years, the people of Hong Kong—who never got to vote on any of this—will simply be handed over to China, as though they were some kind of commodity, nothing but a load of pork bellies being traded. The Chinese leaders have promised that they won’t make any drastic changes in Hong Kong, but nobody believes this. These are, after all, the same fun dudes who gave us the Tiananmen Square massacre.

Tick tick tick tick tick…So today Hong Kong is nervous. People with money or connections are fleeing by the thousands. But millions more can’t leave…Nobody is sure what’s coming, but it’s definitely coming…This knowledge hangs over Hong Kong like a fog, giving the city an edgy, quietly desperate, Casablanca-like feel.

Tick tick tick tick tick…Or maybe not…The truth is that, most of the time, daily Hong Kong life seemed pretty normal. People were teeming and working and shopping and eating and laughing just the way people would if they weren’t doomed…

Those wild and crazy Chinese leaders! Those happy-go-lucky, fun loving, Most-Favored-Nation guys! They’re going to have a ball with Hong Kong. My advice is, see it while you can.