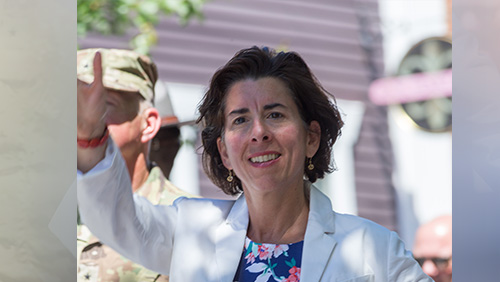 Just as had been expected, Rhode Island Governor Gina Raimondo is coming under fire for her unilateral decision to allow International Gaming Technology (IGT) to control the state’s lottery and most of its video gaming activity. The state’s Ethics Commission has launched an investigation into the arrangement, which gave IGT a 20-year extension to manage the operations in a deal reportedly worth $1 billion to the company. IGT has been a regular supporter of Raimondo’s political activity for the past five years.

The shady deal didn’t set well with gaming companies or with Republican lawmakers in the state. They had called on the Ethics Commission to launch an investigation last month, and that commission has decided to accept the challenge. Lawmakers assert in statement over the decision, “The Rhode Island GOP is pleased that the Ethics Commission will investigate Governor Gina Raimondo for the special treatment her administration has shown IGT while Raimondo and Donald Sweitzer, a lobbyist for IGT, have been associates in the Democratic Governors Association.”

Sweitzer isn’t just a lobbyist for IGT. He was the chairman of IGT Global Solutions for 20 years and is now part of the Democratic Governors Association, an organization led by Raimondo.

Raimondo didn’t offer any other gaming company, such as Twin River or Scientific Games, a chance to bid on the contract, which irked the entities and started to raise red flags. When she asserted that Twin River shouldn’t manage the operations because of the company’s backing by a hedge fund, she only drew more attention to herself. IGT is also backed by hedge funds.

IGT reportedly would pay Rhode Island $25 million for the extension and help attract another $150 million in unspecified projects. It would also upgrade the state’s lottery and slot operations as required, and ensure that 1,100 residents could keep their jobs.

All of those points are easily countered. Twin River has already stated that it would have paid at least $25 million. Upgrading lottery and slot operations are requirements for any company, not specifically to IGT, and 1,100 jobs would not be lost if IGT were not awarded the contract. Those jobs would need to be filled regardless of who was running the show.

Raimondo’s actions definitely need to be called into question and the Ethics Commission is right to launch an investigation. Coming just behind questionable contract deals in Washington, DC and Montana involving Intralot, it appears that better oversight may be in order.