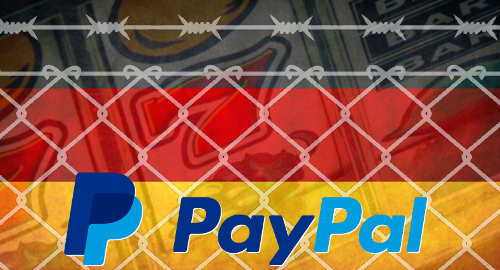 Germany’s online gamblers will have to make do without PayPal after the government ordered the payment processor to stop facilitating unauthorized online casino activity.

This week, PayPal updated its German market terms of service to include “offers that are not legal in your respective whereabouts, including some online gambling offers,” in its list of prohibited activities. The new policy will take effect on October 21.

In June, the German state of Lower Saxony announced that it had warned an unidentified international payment processor to suspend its relationships with internationally licensed online casino operators that serve German customers without local permission. The processor in question was widely suspected of being PayPal.

Schleswig-Holstein is the only German state to have issued online casino licenses, but those licenses expired earlier this year, only to be reinstated in June with the understanding that licensees shouldn’t market their online casino wares to customers outside the state. GVC Holdings’ Bwin brand cut off the PayPal option for their German online casino customers last December.

The 16 German states plan to begin licensing online sports betting operators on an interim basis by next January, but qualifying for these licenses will require operators to shed all ties to German-facing online casinos. The German states hope to reach consensus on a new federal gambling treaty by June 30, 2021.

German-facing operators attended an information session in Hesse last week regarding the proposed new gambling rules, which include the ban on non-sports products as well as a ban on in-play wagering, plus a harsh 5% tax on betting turnover and a monthly spending limit of €1k per customer.

While the state ministers in attendance suggested they might be willing to tinker with that €1k spending limit, operators will also face tough new responsible gambling obligations, including making certain that customers aren’t listed on a central registry of self-excluded gamblers. Operators will also have to secure separate licenses in order to legally advertise their sites in Germany.

These rules only apply to the interim licensing period that will expire in 2021. The hope is that the individual states can agree on a more liberal final treaty that doesn’t promise to so negatively impact operators’ capacity to make money in the German market.