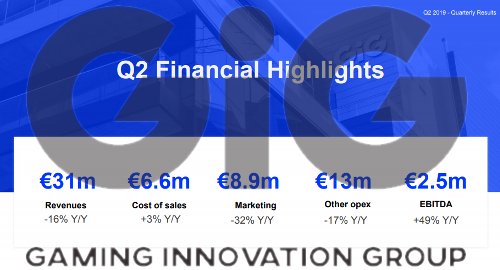 The company blamed the revenue decline on lower casino margins, the loss of a major B2B customer in Q4 2018 (with an impact of -€2.2m) and regulatory headwinds in Sweden. In July, GiG shut the Swedish sportsbooks of its Rizk and Guts B2C brands, citing a lack of regulatory clarity on what wagering markets were allowed.

Highroller was launched in late-2017 and generated revenue of €1.4m and earnings of €200k in the first six months of 2019. The sale is intended to boost the focus on GiG’s best performing B2C brand Rizk, which accounts for 71% of GiG’s B2C revenue.

GiG CEO Robin Reed said his company’s “outlook has improved” now that Q2 is in the rearview mirror, and expressed confidence that GiG’s “recent strategic actions” will put revenue back on an upward trajectory and improve the company’s bottom line in the second half of 2019.