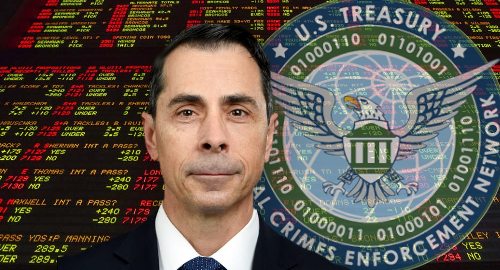 America’s main financial watchdog is warning gambling operators that they need to ensure their anti-money laundering (AML) protocols include cryptocurrency.

On Tuesday, the US Treasury Department’s Financial Crimes Enforcement Network (FinCEN) held its 12th annual AML conference for gambling operators in Las Vegas. FinCEN Director Kenneth Blanco had two main issues on his mind: the explosion of gambling – particularly mobile gambling – in the wake of the US Supreme Court sports betting ruling, and the increasing popularity of ‘convertible virtual currency’ (CVC).

Blanco’s speech including a warning for operators to apply the same AML rigor to sports betting and mobile gambling that they are required to observe in their other gaming verticals. Blanco (pictured) stressed that operators need to use “all available information to detect and report suspicious transactions, or suspicious patterns of transactions, that occur” via mobile gambling apps. (Emphasis in the original.)

Turning to CVCs, Blanco said there were “generally two areas” of interest regarding the intersection of CVCs and gaming: “so-called CVC casinos on the internet, and physical casinos and card clubs that accept CVC for gaming.”

Blanco said CVC-related suspicious activity report (SAR) filings by casinos and card clubs “have not been as robust as expected” since FinCEN issued an advisory on illicit activity involving CVC in May. For one thing, FinCEN wants to know how gaming venues are conducting blockchain analytics to determine the source of a patron’s CVC.

Regarding CVC-friendly online gambling sites, Blanco said that regardless of whether these sites are licensed internationally or within the US, if they’re doing business with US customers, then FinCEN regards such sites as ‘money transmitters’ and requires them to formally register with the watchdog and observe the federal Bank Secrecy Act (BSA).

This isn’t the first time that FinCEN has turned its watchful gaze on cryptocurrencies. Way back in 2013, the watchdog warned that anyone acting as an “exchanger or money transmitter” of CVCs needed to apply for licenses and file SARs like everybody else.

While some in the crypto community may not welcome any extra scrutiny by federal busybodies, the optimist in us chooses to view Blanco’s comments as yet another example of the increasingly popular view that Bitcoin – at least, the real version (Bitcoin SV) – is just another legit form of transacting business.

SPORTS BETTING A SUSPICIOUS ACTIVITY?
Turning back to suspicious activity based around the good old US greenback, Blanco told attendees that FinCEN had witnessed a 9% decline in casinos filing SARs from 2017 to 2018. The top-five SAR states were Nevada, Louisiana, California, New Jersey and Pennsylvania.

Most of these states filed fewer SARs last year, with Nevada falling 7% and Pennsylvania down 15%. Several other states were down by significantly greater amounts, including Oklahoma (-51%), Washington (-46%) and Ohio (-45%).

New Jersey was a notable outlier, as it filed 10% more SARs in 2018, which Blanco suggested was “possibly tied” to the state having launched its legal sports betting market last summer.

FinCEN has spent the last few years doling out seven-figure penalties on California card clubs for getting up to all sorts of chicanery (again, using fiat currency). The watchdog hasn’t announced any such penalties in over a year, but Blanco warned conference attendees not to get complacent, saying FinCEN “will not hesitate to act” when it identifies wrongdoing.