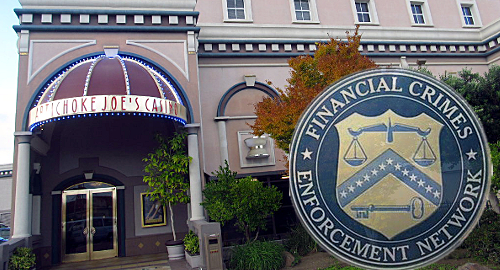 Yet another California card room has been fined millions of dollars for shoddy anti-money laundering practices.

On Friday, the US Treasury Department’s Financial Crimes Enforcement Network (FinCEN) announced it had imposed an $8m civil penalty on the operators of Artichoke Joe’s Casino (AJC) in San Bruno, one of the state’s oldest and largest gaming venues.

El-Hindi said the size of the penalty was determined by the duration and severity of the violations, AJC’s awareness of the activity, the size of the venue, and AJC’s “deficient culture of compliance.”

Federal agents raided AJC back in March 2011, leading to the conviction of two AJC customers for illegal conduct including extending “extortionate and unlawful credit” aka loan-sharking to other AJC customers.

The feds maintain that AJC “senior-level employees” were aware of these shenanigans – in some cases, loan sharks provided chips to customers on the gaming floor in full view of casino staff – yet failed to file any suspicious activity reports (SARs) on this activity.

AJC’s former facilities manager was once questioned by authorities regarding loan shark activity, to which he replied: “It’s a casino. There’s always [expletive] loan-sharks.”

AJC also failed to implement adequate internal controls, which led to the operators tolerating such things as redemptions of large volumes of chips with no cash-in or gaming activity. One patron redeemed $40k worth of chips on a single day with no cash-in or gaming activity, while another patron redeemed $90k in chips over five months without any cash-in activity.

FinCEN claims many of the AJC’s written AML policies were “blank, omitted, or contain placeholders such as … ‘find actual wording.’”

AJC also waited until after the 2011 arrests to conduct its first ever independent test of its AML program, despite FinCEN having required such tests 13 years earlier. By 2015, AJC hadn’t conducted a single followup independent test.

This is but the latest California card room that has been dinged for millions by the federal agency. In July 2016, the Hawaiian Gardens Casino reached a $2.8m settlement with FinCEN for the venue’s repeated violations of the Bank Secrecy Act (BSA).

In January of that same year, the Normandie Casino in Gardena (since acquired by Larry Flynt and rebranded as Larry Flynt’s Lucky Lady Casino) paid $2.5m to resolve its own BSA violations. In December 2015, FinCEN collected $650k from the Oaks Card Club in Emeryville for similar antics.

The negative headlines aren’t likely to stop, assuming the federal authorities had good cause to temporarily shut down the Bicycle Hotel & Casino in April for suspected money laundering on the premises.

Other card rooms have earned negative ink for other reasons. In August, a father and son team pled guilty to running an illegal sports betting operation out of the Lucky Lady Casino in San Diego.