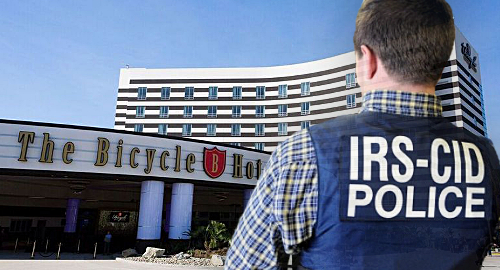 Early Tuesday morning, the Bike was raided and closed by the Los Angeles High Intensity Financial Crime task force, a smorgasbord of state and federal agencies that includes the Immigration and Customs Enforcement’s Homeland Security Investigations, the US Attorney’s office, Internal Revenue Service Criminal Investigation Division, the California Department of Justice and the California Bureau of Gambling Control.

The authorities have so far been tight-lipped as to what prompted the raids on the popular Los Angeles gaming venue, saying only that the federal warrants were under seal and thus they lacked the ability to communicate the nature of their suspicions. However, the warrants reportedly originated with the IRS.

Bicycle spokesperson Becky Warren issued a statement saying that the casino staff were “working with authorities and currently do not have additional information.” Warren claimed that the Bike would resume “full operation” as soon as the gendarmes “have completed their work.”

A California DOJ assistant bureau chief assured Bicycle customers left holding live chips that they will be able to cash out once the casino reopens, which could happen late Tuesday or Wednesday.

California’s card room industry has been an increasing focus for federal financial watchdogs in recent years. In December 2015, the US Treasury Department’s Financial Crimes Enforcement Network (FinCEN) slapped its first ever fine on a state card room, hitting the Oaks Card Club in Emeryville with a $650k penalty for violations of the Bank Secrecy Act (BSA).

In January 2016, the Normandie Casino (since reborn as Larry Flynt’s Lucky Lady Casino) in Gardena reached a $2.3m settlement with the feds over similar BSA violations. Last July, the Hawaiian Gardens Casino reached a $2.8m settlement with FinCEN for equally lax attention to anti-money laundering procedures.