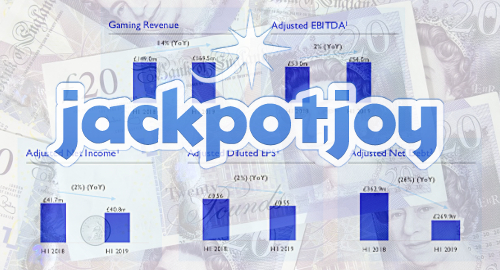 On Tuesday, JPJ released its H1 earnings report, which showed total gaming revenue rising 14% to £169.5m, largely due to Vera&John’s strong organic growth. But adjusted earnings were up only 2% to £54m and adjusted net income fell 2% to £40.8m on higher UK taxes and depreciation on its purchased assets.

The above results don’t include JPJ’s Mandalay bingo brands (Costa Bingo, City Bingo, Sing Bingo) that were purchased by 888 Holdings this spring.

The Jackpotjoy segment, which made up 58% of H1 Group revenue, reported revenue falling 6% year-on-year to £97.7m while the segment’s earnings were down 26% to £34.1m on higher taxes and compliance costs in the UK and Sweden and higher marketing costs in the UK and Spain.

The Vera&John segment reported revenue up 58% to £71.8m while adjusted earnings more than doubled to £25.7m as the site expanded into new markets, including Germany, Brazil and Japan. The company expects Vera&John to maintain its status as the fastest-growing segment as the brand moves into more emerging markets.

JPJ’s executive chairman Neil Goulden expressed pleasure with the results, notwithstanding the UK market challenges. Earlier this month, JPJ announced that it was pulling its Vera&John and InterCasino brands from the UK market in September, leaving its Jackpotjoy brands to soldier on alone.

Goulden also said that JPJ’s recent £490m deal to acquire more parts of rival Gamesys that it doesn’t already own is expected to close in the current quarter, after which the integration process will extend through Q1 2020. Goulden claimed the acquisition will deliver “double digit earnings accretion in the first full financial year of ownership.”

Goulden may be right, but JPJ is paying a hell of a price for ‘brand licenses’ to Gamesys’ bingo and casino brands, while the Gamesys ‘sports brands and games’ units weren’t part of the deal. In 2015, JPJ (under its former Intertain identity) paid £425m for a technology-free brand acquisition from Gamesys.

JPJ was one of the UK online operators singled out in Monday’s gambling-focused episode of the BBC’s Panorama series for allegedly falling short of its responsible gambling obligations. The company maintained that it had followed all its regulatory requirements and that the customer case cited in the program predated many of the UK market’s new responsible gambling upgrades.

JPJ’s shares tumbled around 40p in early Tuesday trading, but recovered to close at £6.61, essentially where it began the day.