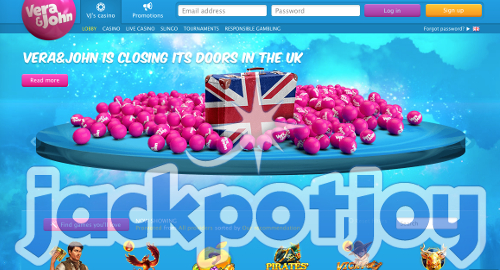 Online gambling operator JPJ Group is pulling its Vera&John and InterCasino brands from the UK market in order to focus its UK operations on its flagship Jackpotjoy brand.

On Monday, UK customers of Vera&John and InterCasino were greeted with notices advising them that the sites would cease operating in the UK as of September 3. The message said the sites’ relationships with their customers had been “wonderful, but we’ve reached the end of our journey together.”

The sites have already ceased accepting new customer registrations and scrapped all promotional activity. As of August 27, the sites will cease accepting deposits or allowing customers to place new wagers. Customers will have until September 3 to withdraw the remaining balances in their accounts but are urged to do so “at their earliest convenience.”

In May, JPJ’s Q1 financial report showed gaming revenue of £83.3m in the three months ending March 31, up 13% year-on-year based on what JPJ called “strong organic growth” at its primarily Nordic-facing Vera&John online casino brand. Vera&John accounted for 41% of JPJ’s Q1 group revenue thanks to the brand’s revenue shooting up 62% year-on-year while its earnings were up 234% from Q1 2018.

JPJ’s report indicated that “enhanced responsible gambling measures” required by UK regulators had reduced the Jackpotjoy division’s revenue by 7% during Q1. The Jackpotjoy division includes the Mandalay and Botemania online bingo operations and the Starspins casino brand that JPJ acquired from Gamesys in 2015.

News of the UK shutdowns was initially greeted by investors as a net positive, sending JPJ’s share price up around 20p to £6.80. But the enthusiasm was short-lived, and the shares closed out Tuesday’s trading essentially back where they started at £6.59.