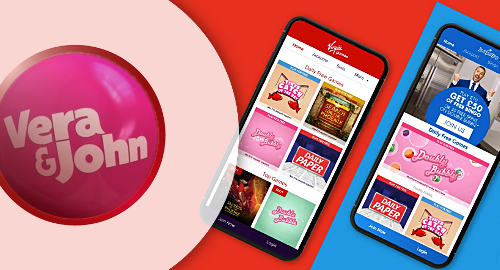 On Wednesday, Gamesys (formerly Jackpotjoy Group) released its earnings report for the three months ending September 30, during which revenue was up 23% to £92.4m while adjusted earnings were down 8% to £25.5m and net income from continuing operations fell by more than one-half to £3.4m.

The results come with a variety of asterisks, including this spring’s sale of the Mandalay bingo brands to rival 888 Holdings, as well as the pricey addition of some more of the original Gamesys online gambling brands. The new Gamesys add-ons only contributed to the final four days of Q3 but nonetheless boosted revenue by £2.3m in that brief span.

The mainstay Jackpotjoy division, which consists of the UK-facing Jackpotjoy brand, the Botemania business in Spain and the Gamesys brands (Virgin Games, Virgin Casino, Heart Bingo and Monopoly Casino), reported revenue up 5% to £52.2m but costs rose much higher, resulting in the division’s adjusted earnings falling 16% to £18.2m.

The Vera&John online casino division, which recently withdrew from the tax-heavy UK market, saw its revenue spike 57% to £40.2m, while earnings were up 22% to £10.2m. Vera&John’s success was primarily due to its push into ‘grey’ markets such as Brazil, Germany and Japan.

The impact of Vera&John storming Japan’s shores can’t be understated, as the market accounted for 28% of Gamesys’ overall revenue in the first nine months of 2019 versus just 12% in the same period last year. Over the same period, the UK market’s contribution fell by 10 points to 47% while Sweden’s new regulated market fell by more than half to 4%.

Investors were unmoved, pushing the share price down 2% to £6.91 by the end of Wednesday’s trading, although that was well above its mid-day low of £6.63.