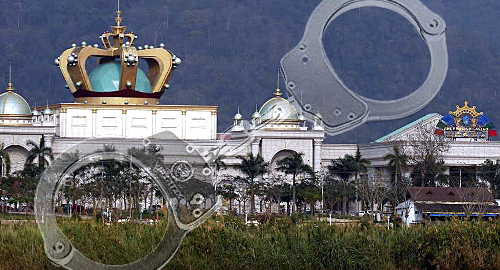 Thailand authorities have arrested the suspected ringleader of a group who stuck up the Kings Romans Casino in Laos earlier this year.

On Monday, Thai media reported that immigration police in Samut Prakan province had arrested a Chinese national identified only as Ying who is suspected of leading a gang of 22 robbers who staged a daring heist at the Kings Romans in Laos earlier this year.

The crime was reportedly enabled by Ying dressing up as a Chinese policeman and convincing members of the casino security team to allow several other members of the gang to enter. Other gang members were already on the casino floor, pretending to be gamblers.

Once the gang was all inside, they forced the casino’s actual gamblers to fork over RMB3m (US$427k), while also making off with several smartphones and computers.

Ying reportedly entered Thailand legally in March but Thai immigration officials plan to revoke his visa so that Ying can be extradited to China to face prosecution.

It’s not clear why Ying is going back to China, since Kings Romans is based in the Golden Triangle Special Economic Zone near Laos’ borders with both Thailand and Myanmar, but not China. Clearly, Ying has a rap sheet in his home country that Beijing is determined to enforce.

News of Ying’s arrest came just days before the ministers of public security for both China and Laos announced a plan to enhance law enforcement cooperation between the two countries. Among the naughty behaviors the two parties want to crack down include “telecommunications fraud and online gambling.”

China may also seek to rein in shipments of illegal drugs coming into the country from Laos. In 2018, US officials named Zhao Wei, the co-owner of the Kings Romans Casino, as the head of a ‘transnational criminal organization’ responsible for distribution of heroin, methamphetamine and other illicit substances. Chinese officials have reportedly seized large drug shipments that were eventually traced back to the casino. Zhao Wei has denied the US allegations, calling them “malicious rumor-mongering.”

Laos doesn’t have many casinos, particularly since the government shut down gaming venues in its Boten region, which is close to the Chinese border. Beijing reportedly leaned on the Lao government to act after multiple reports of Chinese citizens being held for ransom because they couldn’t pay their gambling debts.

Besides the Kings Romans, the country’s biggest casino is likely Macau Legend Development’s Savan Legend Resorts in Savannakhet province, which may soon be facing additional financial obligations. In June, the Lao government announced that it would increase its “levy” on casinos from its current 35% to 50%. It’s unclear whether this levy referred to a tax rate or a flat fee.