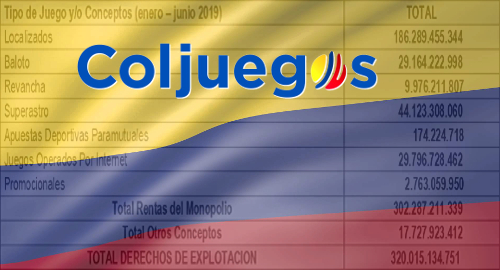 Colombia’s online gambling market reported growth of nearly two-thirds in the first half of 2019.

This week, the Coljuegos regulatory body reported that the government’s share of the country’s online gambling revenue had jumped to COP29.8b (US$8.9m) in the six months ending June 30, a 63% rise over the same period last year.

However, the pace of these new license issues has slowed since the initial flurry – that February license was the only one issued this year so far – suggesting the Colombian market may be reaching a saturation point. Last December, Coljuegos reported that its online licensees had registered a total of 1.7m customer accounts (out of a population of 50m), a number that has grown to 2.5m as of this June.

Fecoljuegos, the association representing Colombian-licensed online gambling operators, recently welcomed Rushbet.co – the local operation of US operator Rush Street Interactive, which received its Colombian license in June 2018 – into its membership. Fecoljuegos now counts 11 of the country’s 17 online licensees among its ranks.

On August 21, Fecoljuegos and its land-based counterpart Asojuegos will welcome attendees to the Gaming Colombia event at the Grand Hyatt hotel in Bogotá. The two-day event is a twofer, as this year’s lineup will include the Laft America Zero Tolerance with Money Laundering gathering at the same venue.

Colombia may have been first out of the gate, but other LatAm markets appear increasingly interested in making up lost ground. Argentina’s largest province Buenos Aires is currently vetting applicants for its seven online licenses while the white whale of Brazil opened a public consultation this week on how to craft its online sports betting regulations.