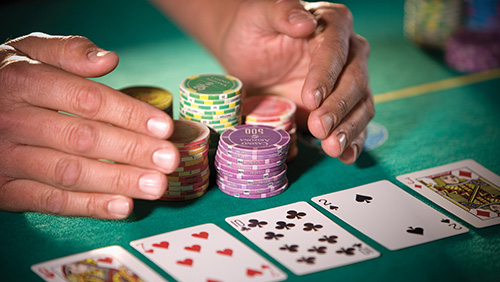 When it comes to World Poker Tour (WPT) Main Event Final Tables, the one that began in Choctaw and will end in Las Vegas feels like an untouched field of snow to all but one of the finalists.

The $3,700 buy-in WPT Choctaw Main Event attracted 577-entrants, and Will Berry will lead the final six when the action resumes at the HyperX Esports Arena Las Vegas on May 31.

Berry is in esteemed company.

Craig Varnell is a World Series of Poker (WSOP) bracelet winner, who will be making his third WPT Main Event final table appearance. Varnell finished fourth in the WPT Gardens Poker Festival Main Event in July, and also finished third in the WPT Choctaw Main Event in 2016. He does have one WPT title to his name after winning the 5,113-entrant WPT500 at the ARIA in 2015.

Chip stacks belonging to Berry and Varnell double that of Nick Pupillo. The multiple Heartland Poker Tour (HPT) Main Event winner begins third in chips. Pupillo has made several WPTDeepStacks Main Event final tables, but never anything like this.

Here are the final table chip counts and payouts.

Three men who reached the lemon peel in the bottom of the glass of this one includes the man who wins World Series of Poker Circuit (WSOPC) gold rings for fun, Josh Reichard (15th), the three-time WSOP bracelet winner, David Pham (17th), and the recent WSOPC Choctaw Main Event winner, Dave Alfa (22nd).

From Choctaw to Parx and Dominick Sannino has taken down the $1,600 buy-in WPTDeepStacks Big Stax Main Event. Three hundred seventy-four entrants squeezed into Parx Casino, and Sannino told the WPT press that despite the money being ‘great’, it’s the trophies that matter.

It’s the second live tournament win for the sentimental New Yorker, and it’s the second time he has broken his personal best ITM finish in the past two months after finishing 6/2199 in a $600 buy-in DeepStack Event held during the Borgata Spring Poker Open for $48,953.

The WPT Gardens Poker Festival will be the first televised event of Season XVII.

The Hawaiian Gardens in California hosts the $5,000 WPT Gardens Poker Festival Main Event, July 20 – 25, and the casino is giving away a brand new BMX X1 to the winner. Live satellites begin July 12.

It’s the third event stencilled into the Series XVIII schedule alongside WPT UK from Dusk Till Dawn (DTD) in Nottingham September 30, and WPT Montreal from the Playground Poker Club on October 27.