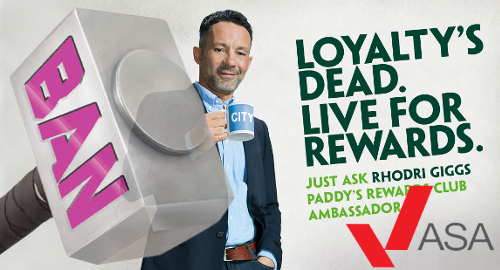 The UK gambling industry took a kicking Wednesday from the nation’s advertising watchdog, who deemed three different adverts to have broken its rules.

On Wednesday, the Advertising Standards Authority (ASA) published three rulings that went against gambling operators. Among these was the Gamesys ‘Monopoly Casino’ ad that the ASA determined was likely to have particular appeal to children, a ruling that leaked to the UK’s reliably anti-gambling media over the weekend.

The typically tongue-in-cheek promo featured Rhodri reflecting on his life of loyalty, including patronizing the same pub/gym/etc., only to declare that “loyalty gets you nowhere. Live for rewards instead.” Rhodri was then shown in a flash car, thanking Paddy Power and driving away, revealing a license plate that read ‘Ambassador Car.’

The Paddsters protested that there was no gambling depicted in the ad, and that Rhodri patting the car while he thanked the company indicated that he’d either been given the car (or the use of the car) in exchange for his ambassador role, not because he’d bought it with money won via gambling.

The ASA didn’t buy it, saying the ad’s depiction of Rhodri phoning his bank to inquire about his balance, his subsequent trip to the pub where he orders champagne instead of a pint of bitter, suggested that he was “now reaping the rewards, both financially and in terms of his own self-image,” of gambling. The ASA also felt the ad encouraged viewers to follow Rhodri’s example and improve their own financial situation and self-image through gambling.

The ASA took a similarly dim view of a tweet from Tottenham Hotspur FC’s official account that featured the logo of bookmaker William Hill. The tweet, which included a link to Hills’ betting odds on a Spurs v. Borussia Dortmund match, depicted Spurs’ starting lineup for the match, including players Harry Winks and Davinson Sanchez, both of whom were under 25 years of age.

Both the team and the bookie protested that neither of the youthful starters were depicted individually, nor were they the sole focus of the promo. But the ASA has strict rules against individuals who are either under 25 years old or appear to be under 25 appearing in marketing come-ons that feature anywhere but “a place, such as William Hill’s own website, where a bet could be placed through a transactional facility,” and in situations where those youthful individuals are “the subject of the bet offered.”