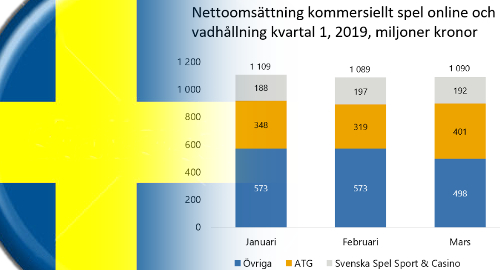 On Thursday, Sweden’s Spelinspektionen regulatory body released a brief snapshot of how its new online gambling licensees were faring under the new regulatory scheme. Based on its own computations and Swedish tax agency info, Spelinspektionen said net revenue over the first three months of 2019 totaled nearly SEK3.3b (US$353.4m).

Despite having nearly 60 competitors, Sweden’s two former gambling monopolies claimed half (SEK1.645b) of Q1’s overall online revenue. Svenska Spel (sports betting) was estimated to have generated revenue of SEK577m while ATG (horseracing) was the overall champ with SEK1.07b. (Those figures don’t include either firm’s land-based operations.)

Earlier this month, Spelinspektionen released figures covering total online and land-based gaming revenue over the first two months of 2019. Svenska Spel was the clear leader, with ATG in second, while international online operators were well back, led by the Kindred Group’s Unibet (SEK247m), Bet365 (SEK117m) and LeoVegas (SEK103m).

Both Svenska Spel and ATG had been prevented from offering online casino products prior to the market liberalization that took effect this January but both firms spent the latter part of 2018 inking technology deals to ensure they nabbed their fair share of that sweet online casino cash.

ATG has pool-sharing deals with other international race betting monopolies, including France’s Pari-Mutuel Urbain, Finland’s Rikstoto and Denmark’s Danske Spil, but has so far rejected overtures from BOS members Betsson and Kindred Group.

In February, BOS filed a complaint after learning that Svenska Spel was marketing its new online casino to its land-based customer database, a benefit that none of its international online competitors enjoyed. Svenska Spel has since curtailed these efforts, but the BOS noted that the damage has already been done.

Some online operators have already indicated that their Swedish market revenue has fallen since the regulated market’s launch. This week, Ninja Casino parent firm Global Gaming announced it was scrapping a planned dividend to shareholders, primarily due to reduced revenues from its Swedish-facing operations.