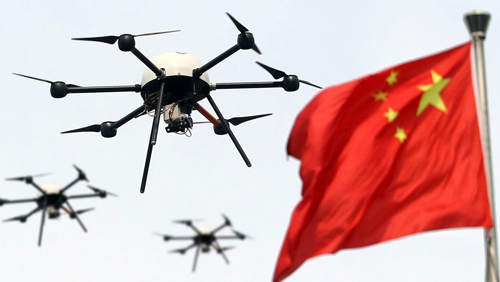 Chinese police have turned to the use of drones in order to combat the illegal gambling industry in the country. According to Chinese media outlet People’s Daily Online, the drones are the eyes in the sky, surveying the landscape on the hunt for gamblers and raid well-hidden gambling houses. It sounds like the start of the next (and perhaps failed) Terminator sequel.

China has a strict ban on gambling and prohibits virtually all types on the mainland. Those who set up gambling operations face up to ten years in jail and those who participate in gambling can be jailed for up to three years. However, illegal gambling still runs rampant.

Enter the drones. Since last year, law enforcement has led raids on a number of mobile casinos with the assistance of the unmanned aerial vehicles in an effort to keep gambling from “corrupting the spiritual civilization of society.”

Last July, 31 suspects were arrested by police in Luchuan County in Guangxi Province after police used a drone to locate a temporary gambling house that was operating in a residential complex. This past February, police used drones to patrol the skies in order to try and prevent gambling during the Chinese New Year holiday.

In one recent case, law enforcement officials in the Anhui Province used a drone to uncover a gambling den operating in a remote part of the wilderness. With the drone’s help, police were able to bust the gambling ring and arrest 35 individuals through footage obtained from the drone. According to the Shushan Branch of the Hefei Public Security Bureau, the operation continuously changed its location in order to avoid detection, but the drone tracked it down.

Because this particular gambling ring had grown larger than most, police were determined to shut it down. Tips had been received regarding where the meetings were taking place and police brought in the drone to help with the investigation.

When law enforcement was ready to swoop in, it put the drone in the air to provide reconnaissance and to collect evidence. From there, when police knew what they were up against, the raid commenced with about 50 officers.

Of those 35 arrested, 13 were caught as they tried to make a run for it. Heading off into the woods, the drone stayed on top and guided police to their whereabouts.

The next step, if Hollywood has taught us anything, is that the drones will be equipped with weapons and will become the next law enforcement department.