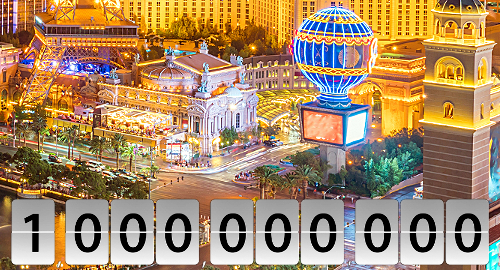 Nevada’s casino gaming revenue suffered a slight year-on-year decline in February but still managed to top the $1b mark.

Figures released Thursday by the Nevada Gaming Control Board show the state’s casino licensees generated gaming revenue of $1.012b in February. The sum is a 0.62% decline from the same month last year, but an improvement over January 2019’s $984.5m.

Casinos on the Las Vegas Strip fared worse than some of the state’s other regions, as Strip gaming revenue was down nearly 2% to just under $592m. By contrast, Downtown casinos reported revenue up 9% to $58m. Casinos in the Lake Tahoe areas reported revenue falling around one-quarter following a bout of particularly inclement weather.

February’s slots revenue was up 0.5% to $608.3m while the ‘table, counter and card games’ segment was down 2.2% to $403.2m. The table numbers were dragged down by baccarat, which got the usual seasonal jolt from the Chinese New Year celebrations but the VIPs also played luckier, resulting in baccarat revenue falling more than one-quarter to $132.1m.

Over at the casinos’ sportsbooks, revenue shot up 235% year-on-year to a hefty $35.8m, more than twice January’s betting take. February’s betting handle hit $458m, a new state record for the month, with more than half of all wagers being placed on basketball. Betting hold came in at a respectable 7.8%.