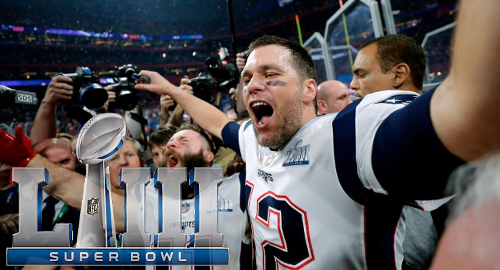 Betting on the 2019 Super Bowl was nearly as anti-climactic as the game itself, at least in terms of betting volume.

The NFL’s marquee contest was an absolute stinker on the field, but it marked the first time that legal wagering on the outcome was available outside Nevada, so we guess we have to talk about it.

One lucky bettor at Nevada’s South Point casino sportsbook turned a $250 wager into $100k by taking a 400-1 flutter on the Rams scoring exactly three points. So if you want to blame someone for Sunday’s snorefest, there’s your guy.

In New Jersey, the Division of Gaming Enforcement reported that state-licensed sportsbooks handled just under $35m in Superb Owl wagers, a figure that disappointed many observers who didn’t expect the state to do less than one-quarter of Nevada’s number.

Worse, New Jersey books took a bigger bath than Bill Belichik’s Gatorade shower – the liquid’s color was blue, in case you were wondering – by losing $4.6m on the game. With any luck, the bettors who crowded into the casino sportsbooks went on to lose a lot of that at the roulette tables.

William Hill US CEO Joe Asher told the Associated Press that his company’s New Jersey books had their best day since the legal market launched last May, at least in terms of betting handle. Asher claimed Hills’ local operations had basically broken even on the day but reported a record number of new mobile account signups.

In Mississippi, the state’s commercial casino operators reported handling a modest $4.67m on the Super Bowl. Pennsylvania, West Virginia, Rhode Island, Delaware and New Mexico have yet to report their local figures.

The internationally licensed online sportsbooks who offer a wider variety of prop wagers than stateside operators endured no shortage of controversy over Gladys Knight’s extra-long rendition of the US national anthem.

The R&B icon repeated the song’s final word ‘brave’ twice, creating some debate – at least, among those who took the ‘under’ on the anthem’s length – as to whether the song should have been considered over and done following the first utterance of the word. But it’s a mark of just how lousy that game was that this was the day’s biggest controversy.