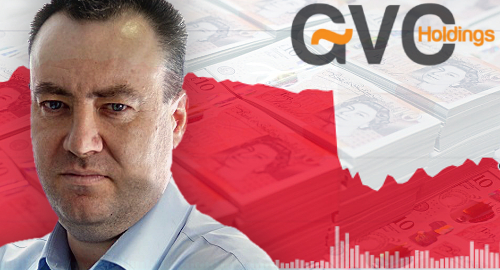 UK-listed gambling operator GVC Holdings suffered a double-digit fall in its share price on Friday after the company’s two senior executives sold off the bulk of their stakes in GVC.

GVC shares closed out Friday’s trading on the London Stock Exchange down nearly 14% to 588.5p, after trading as low as 557p before staging a minor rally. The sell-off came just days after GVC delivered a fairly impressive financial report card for 2018, although mergers & acquisition costs resulted in the company’s third straight year of net losses.

Feldman sold 900k shares at the same discounted price, earning him a £6m payday, and leaving him with 287,408 shares in the company.

Alexander’s official statement announcing the sale said both individuals “remain fully committed to GVC.” Alexander insisted he was “here for the long term” and noted that his plans for GVC “will take three-plus years to accomplish.” Alexander also pledged that neither man would reduce their holdings below their current levels.

A GVC spokesperson later revealed that the two execs were prompted to sell their holdings to “satisfy an institutional buyer.” The company also noted that Alexander’s remaining GVC shares are worth roughly five times his annual base salary.

But investors appeared unconvinced by these reassurances, leading to Friday’s sharp sell-off. AJ Bell investment director Ross Mould told the Financial Times that investors may have been spooked by parsing Alexander’s pledge that the duo wouldn’t sell any more shares “while we continue at GVC,” reading into this caveat the suggestion that both execs may be headed for the exits.

The past two years have seen GVC shareholders stage minor revolts against Alexander’s annual pay packet. In 2017, 45% of shareholders voted against the company’s remuneration report, while 44% voted against 2018’s report. GVC’s share price peaked at £11.70 last July, more than twice its current value.

The two execs chose to offload the bulk of their shares just three weeks before the UK government hikes the Remote Gaming Duty from 15% to 21% and imposes new stake reductions on fixed-odds betting terminals, which GVC says will likely result in the closure of up to 1,000 of its retail betting shops.