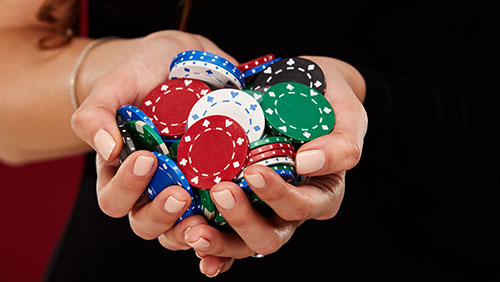 A combination of stories carrying a World Poker Tour and female vibe including a Women’s Warm Up during the LAPC, a million dollar giveaway, and a partnership between Allied Esports and Kristen “KittyPlays” Michaela.

Waiting for a train this morning, as part of a community of commuters chowing down on Peters Pasties, we all watched Prime Minister’s Question Time on a giant TV screen in the waiting room.

A female constituent stood up and complained about the vast difference in remuneration for those that compete in the FA Cup, and those who participate in the female version of the same competition.

You don’t get the same type of problem in poker, but there is still a patriarchal power in poker.

In September, the World Poker Tour (WPT) decided to do something about this by holding the first WPT Women’s Poker Summit. It was a resounding success, and it’s nice to read this morning that it was just the beginning.

In their continuing bid to make poker more attractive to females and beginning poker players of all genders, the WPT is putting on three different experiences in the coming months. The first takes place at the Commerce Casino in Los Angeles this weekend. The LAPC is in full swing and on Friday 15, the Women’s Poker Association (WPA) will sponsor a Women’s Warm Up in conjunction with LearnWPT.

The plan is to host a Poker Seminar at 3 pm followed by a freeroll hosted by Justin Hammer one hour later. The $40 buy-in experience sold out its 70-entrant cap, so you will have to be quicker next time.

Here are the prizes.

1st place is a $570 No-Limit Hold’em Double-DeepStack seat.
2nd place is an annual membership to LearnWPT.com valued at $228
3-5th place $150 Mega Satellite seats for use at Commerce Casino.

The LAPC culminates with the $10,000 WPT LAPC Main Event, and on March 1st, the Commerce will give away 100 satellite seats worth one million dollars.

.@CommerceCasino and @LAPC are awarding 100 satellite seats to the #WPTLAPC Main Event on March 1. Make sure to get in on the One Million Dollar Day. #TheCupAwaits https://t.co/Ud6iJYJ07V pic.twitter.com/strISCbVIr

Last year, Dennis Blieden beat Toby Lewis to win the $1m first prize in the 493-entrants field with $4,681,035 in prize money handed out to the field.

I suspect that field size will expand this year.

We will end where we started with more female energy, and news that the WPT’s sister company Allied Esports has hired Streamer and Fortnite Caster, Kristen “KittyPlays” Michaela, to front a brand new live show held monthly at the HyperX Esports Arena Las Vegas in the Luxor.

Allied is calling the show Playtime with KittyPlays, and the streamer who spends more time moonwalking for her audience than Michael Jackson ever did, will be joined by celebrities from the world of Esports beginning Spring 2019.

“I’m so excited to take my stream to the live stage and interact with my community in person,” said Michaela. “We are going to have an incredible lineup of guests on the show to talk, play and have some fun, and I can’t wait to share this experience with everyone in the arena and those watching on the live stream.”