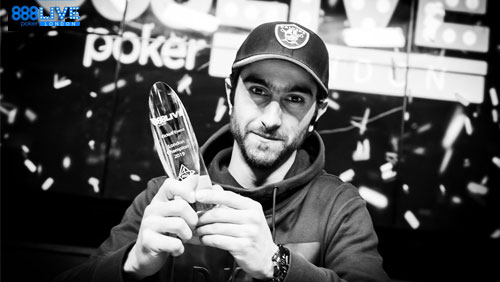 Two stories with 888Poker in the headline as the online poker giant agrees upon a deal with the World Poker Tour, and 888Live London Kickoff wraps up with victory for Ivelin Ganev.

A partnership between The World Poker Tour (WPT) and 888Poker will result in two new events joining the 2019 WPTDeepStacks (WPTDS) schedule.

888Poker and WPTDS will co-host two European events held at Malta and Portugal, in a new three-year deal between the pair. Like a Japanese restaurant and red bean ice cream, the deal makes perfect sense. The WPT doesn’t possess a solid homegrown tributary leading the fish, whales and sharks from online poker to its brick and mortar cousin. 888Poker just likes to be affiliated with the best brands in the business.

Hermance Blum, WPT VP Europe, believes the addition of 888Poker will ‘greatly increase visibility at WPTDeepStacks locations across Europe.’ Guy Cohen, 888 Holdings’ Senior Vice President of B2C, said the company was ‘excited’ to partner with the WPT, and were ‘looking forward to launching our poker room in Portugal soon.”

888Holdings became the second online poker operator to receive a license to operate in the Portuguese market in January, joining the market leader, PokerStars.

Ivelin Ganev has taken down the first 888Live event of 2019.

Ganev defeated 718-entrants in the £440 buy-in 888Live London Kickoff at Aspers in Stratford after the final four players agreed to share the loot in an ICM deal that left £5,000 in cash to play for, and a package to the 2019 World Series of Poker (WSOP) Main Event, including a $10,000 Main Event seat.

It’s the first time that Ganev has ever won a poker tournament, cashing seven times, with five of those finishes coming in 888Live events. Ganev qualified for the Live London Main Event in a £120 live satellite. His previous best score was a 6/500 finish in a £220 DTD200 event for £4,150.

The event was a massive success for 888Poker with the £295,020 prize pool more than double the £120,000 guarantee. The former World Champion, Martin Jacobson, finished 82nd.