Home / Bitcoin / Deposits can be easy with Bitcoin SV 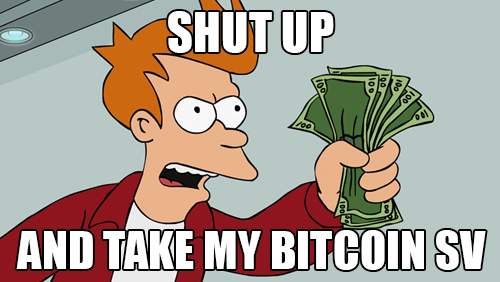 There’s an old saying that I’m quite fond of, “Shut up and take my money.” It’s a fairly simple sentiment. I have money, I want what your offering, so let’s just get this over with. It’s an idea that frequently applies to online gambling. The player wants to get their bets in urgently, they have money, and there shouldn’t be anything more complicated than exchanging the money for a wager. Now, the best way for operators to take that money is to start accepting Bitcoin SV (BSV).

Most operators will have several deposit options available to their players. There are the more direct options, like credit cards; however, they are subject to fees and the likelihood that banks will deny the transaction. Some accept direct bank transfers, but that can require a bunch of information and maybe an extra call to the bank to set it up. Then there are the third party wallets, like Neteller, which also requires set up, includes fees, and is fraught with other problems.

The crucial problem with all of these options are they are dependent on a third party to help move the player’s money along. If they fail to do that, or simply don’t want to, then the player is more likely to start shouting that old saying I like more forcefully, and they’ll likely be saying it to the operator.

Without a doubt, the easiest way to break down these barriers, and make it easy for both the player and the operator, is to deposit with BSV. Without any middleman to say no, BSV allows the operator to just take the money. The player can start wagering with their funds in seconds, guaranteed, as BSV is built to massively scale to the demands of the network, and won’t fail or slow down when you need it most. Like the third party wallets, there will be some setup, but then it has all of the benefits and none of the negatives of any other option.

Depositing should be easy. Operators want to collect deposits, and players just want to make their bets. We know customers want to use Bitcoin, and BSV is the only option that follows the original Bitcoin vision of digital currency. Once BSV gets going, fewer players will be doing impressions of my favorite expression.